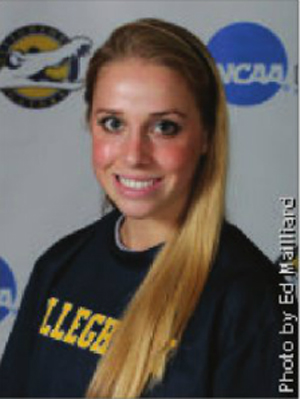 Individual accomplishments brighten losses on men and women’s side

With about five minutes remaining in the second half of Heidi Goeller was sitting on 20 points, needing 21 to tally her 1,000th. Goeller stepped to the line for two free throws.

After Gooeller missed her first, fellow junior and close friend Ann Ryan had something to say. She took a couple steps towards Goeller, leaned in and said, “Heidi, you got this.”

Goeller sunk the second free throw without problem. All in attendance rose to their feet erupting in cheers to celebrate her achievement.

Quick hugs and hand slaps came from teammates and opponents on the floor. As she retreated to half court the noise only got louder and a slight smile slid across her face.

Goeller led all scorers with 23 points to end her Allegheny career.

Goeller’s mark comes after only three years of play. Her studies in the medical field will take her to a different institution in the fall.

“She is the hardest worker I have ever coached,” said head coach Kate Costanzo, “[She’s] very deserving of 1,000 points.”

Postgame, Goeller had no intention of hogging the limelight.

“This is as much my honor as it is my teammates,” said Goeller. “It just was not a big goal for me.”

Goeller is only the 12th player in Gator basketball history to eclipse 1,000 points.

While Goeller excelled on the court, the Gators fell to Wittenberg, 82-66.

The team failed to hold a lead during the matchup. The Tigers controlled the game from the start and never looked back.

The Wittenberg sideline was vocal throughout, with the Tiger bench roaring for their teammates on the floor. Wittenbeg’s success was spread around, with ten players seeing action for the Tigers and four of them scoring in double digits.

“We do have a lot of different people who can look to be an option in our offense,” said Wittenberg Head Coach Sarah Jurewicz. “I think tonight showed that we are looking at that again.”

Wittenberg’s bench outscored Allegheny’s 27-5. The Gators were shutout in second chance points 20-0 and were outrebounded on the offensive boards by 15.

“We had one offensive rebound all night and that’s not going to win us many games,” said Allegheny Head Coach Kate Costanzo. “We knew that our best shot at beating them would be to keep them in the 60s and we did not do that.”