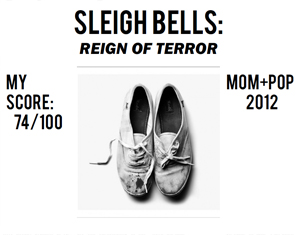 Lovely yet deafening, precisely crafted yet visceral, the album Treats was an unlikely fusion of nu-metal riffery, cheap, rudimentary boom-bap beats, and a vocalist who could effortlessly jump between being a ‘riot grrl’ to a melodious songbird. It was an amalgamation of guilty pleasures, repackaged into a noise pop masterpiece.

However, it also begged the following question: is Sleigh Bells just a mere one-off novelty act?

The band’s sophomore effort Reign of Terror answers this concern. While the release is not a revolutionary tempo-setter, it does illustrate the band’s growth and the viability of its rather idiosyncratic sound.

The opener, “True Shred Guitar” sounds like a neurotic Axl Rose leading a high-school pep rally of Adderall-tweaked teenagers. To cheering crowd stock noises, Strauss screams, “New Orleans! What the fuck’s up!” Shortly thereafter, Miller’s guitar roars, and it becomes clear that the band has not abandoned the strident sludge of its processor. It’s also brilliantly deceptive, catering to your worst fears that the band will banally tread the path of novelty act.

But then the band transitions seamlessly into “Born to Lose,” the album’s real thesis statement. Miller’s four-chord primitive riffery blissfully crunches like a Def Leppard cover of a Ronettes’ song. It’s a carousel ride of nostalgic guilty pleasure, and a preview of the nine tracks to come.

Nuanced, meticulous and precise, the album abandons the blatantly (albeit redeeming) low fi-fi nature of Treats and opts for a more polished, refined approach. Leveraged against the abrasiveness of Miller’s playing, Strauss’ polished vocals take on a new level of suppleness and shimmering beauty. It’s not that this approach is new ground for the band, but Strauss takes on a nested disillusionment and opts for grace over turbulence. This choice may be reflective of the band’s laborious touring over the past two years.

“End of the Line,” the album’s strongest track (and arguably Sleigh Bells’ best song to date), is a lush, idyllic epic of reverb-laden, My Bloody Valentine-esque vocals, cheap, swelling synths and a counterpoint guitar harmony.

Not only is it a summation of the ‘Sleigh Bells experiment,’ but it also illustrates Strauss’ disillusionment in full force. In this nihilistic serenade, Strauss sings, “No one loves you, up above you, no one hears you, no one sees you.”

The band exudes less of the raw, abrasive impetuousness that made Treats such a joyride. There are flickers of it on tracks such as “Crash” and “Demons,” but the album’s most gaping flaw is predictability.

By the fifth track, “Leader of the Pack,” they feel rigidly fixated in a singular motif of arena rock riffing, high school nostalgia, and Strauss’ heavenly vocals.

However, buried under the ruckus is a humanness and authenticity lacking in most indie rock, and if Strauss and Miller have one thing, it is spunk. Even if they fail at times to wade outside their stylistic boundaries, they approach these pieces heedlessly and with a clear dedication to their craft. And while sometimes this can end up in sounding disjointed and overwrought, it can also work to their advantage on “End of the Line,” “Crush,” and “Demons.”

If anything, Reign of Terror feels like a transition– something that, while not extraordinary, signifies that the band is evolving.

Perhaps it lacks the abrasiveness and stylistic freshness of its predecessor. But Reign of Terror is clearly a statement that the kitschy, ear-shattering novelty of Treats was no lounge act. Make no mistake about it: this unlikely duo of heavy metal shredder and bubblegum pop princess is here to stay.