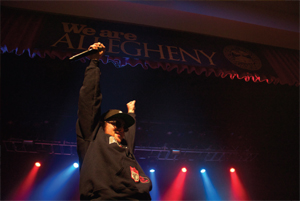 Pittsburgh-based rap artist Mac Miller performed for Allegheny College February 17 to a sold-out Shafer Auditorium. After getting an early professional start at 15, Miller began putting together records and touring internationally while doing his best to remain grounded despite his fame. CATIE MCMEKIN/THE CAMPUS

THE CAMPUS: When did you first start to make your music?

MAC MILLER: I’ve been making music since I was about six years old. It was different usually back then. However, it was more like, you know, Jack Johnson type stuff when I was six. But now it’s grown into, like, O. J. the juice man.

THE CAMPUS: Jack Johnson. That’s pretty impressive for a six year old. Do you remember what your moment of epiphany was, when you knew without a doubt that this is what you wanted to do with your life?

MAC MILLER: Probably the first time I heard myself recorded was when I knew that this was what I wanted to do with my life. Just being able to make a song and it sounding like a real song. Because before I was actually professional, I loved the fact that I could make it sound like what I thought at the time was professional.

THE CAMPUS: How did you get started?

MAC MILLER: The thing was, when I first started, the dream was to get signed to a big label and then have them make me into a star. […] But I got tired of waiting around for someone to make it happen for me. So technically I became professional at 15. Other than the magnitude of my work, there’s nothing different about the situation now other than the money and all that shit, but as far as the magnitude of work, as far as the seriousness, it started when I was 15.

THE CAMPUS: What is your relationship with Wiz Khalifa?

MAC MILLER: He’s just my homie, man. We’re both from Pittsburgh. We’re both signed to Rostrum. He’s always going to be my friend no matter what, whether we’re making music or just kicking it together.

THE CAMPUS: What has been the toughest moment of your career so far? What are some obstacles you’ve encountered?

MAC MILLER: The Internet has been a very positive thing and in a sense it’s been a tool to get much of my music out to the people and let people in on who I am as a person. But the other thing is, there’s so much out there and stuff, like people really misunderstanding everything going on, and tastemakers and shit thinking that they know a lot about you but not knowing anything. That would be my biggest obstacle, like, feeling a sense of, at a young age, being in the spotlight. At age 18 and 19 feeling the need to prove yourself to people, and then now, at 20, realizing that you don’t need to prove yourself to anybody.

THE CAMPUS: How do you stay grounded?

MAC MILLER: My friends. Everyone around me just keeps me grounded and you know it’s the same situation it’s always been. And I have people in my life that still make fun of me and think I’m not shit, so…

THE CAMPUS: So do they tell you if you’re getting a big head? Do they confront you about it?

MAC MILLER: I mean, I’ve never really had that problem. I think I’ve done a good job at kind of keeping myself chill, not getting ahead of myself and always being modest. I always check myself on that. I think that’s just values that my family instilled into me. Like no matter what happens, to always check myself and realize I’m no cooler than anybody else when in reality I am. [laughter] Just joking, side note, asterisk.

THE CAMPUS: If you could say one thing to people who knew you back in high school, what would it be?

MAC MILLER: Stop trying to call me Malcolm in public just to prove to people that you know me. This is my whole thing about people coming up to me and calling me Malcolm. It’d be one thing if my rap name was like Young Swagmeister and you’d known me since I was like 12, you don’t have to come up to me and be like, ‘Hey Young Swagmeister, how ya been?’ But Mac is my nickname. It has been my nickname since I was two. My grandpa be callin’ me Mac since I was two. I go by Mac because that’s my name and the only people who call me Malcolm is when my mom’s saying something serious.

THE CAMPUS: What are your future plans? Do you want to keep making music? Do you ever want to go to college, have a family or a ‘normal’ life?

MAC MILLER: It’s kind of like an acceptance that life at this point is never gonna be ‘normal.’ I think this is normal for me. But college, you know, yeah man, someday, when I have time. There’s no time for college right now, but I would like to further my education at some point. But right now I’m furthering my education in a different way. And the plan right now is just to keep growing, as a person and as an artist, and putting out high-quality music. And releasing a mix-tape called Macadelic that will be out in March. There’s Macadelic the mixtape and Macadelic the tour. Those are my next two things. Just living day by day and swagging out with my homies.

THE CAMPUS: How did you get started?

DJ ENFERNO: I started in high school. So like high school dances and everything. I just hustled and got gigs[…] I started talking to the right people junior and senior year. I went to four years of college, same thing, just a bigger market. After that I hit the club scene in D.C. and that’s a whole other ball game when you start doing more clubs. You really have to be good at networking, you have to be good at what you do too, you just gotta be well-rounded.

THE CAMPUS: Had you ever met Mac Miller before?

DJ ENFERNO: I hadn’t. You know I wasn’t very familiar with his music until really recently. He’s a really good performer too. I saw the whole show from back here, and I enjoyed it a lot.

THE CAMPUS: Where did the name DJ Enferno come from?

THE CAMPUS: How was the crowd tonight?

DJ ENFERNO: The energy was good, but at the same time, you look at like, how big the student population is, versus the amount of people who actually came out, and it’s just amazing.

THE CAMPUS: Why do you do what you do?

DJ ENFERNO: Really, for me, the dream has always been to make people happy through music. It’s funny, my parents they’ve always been supportive ever since I started. They even got me a loan to get me DJ equipment back in the ‘90s. But one time my mom pulled me aside and said, ‘Okay, I now understand why you do this for a living.’ You’re always around people that are having fun.

THE CAMPUS: Do you ever get nervous?