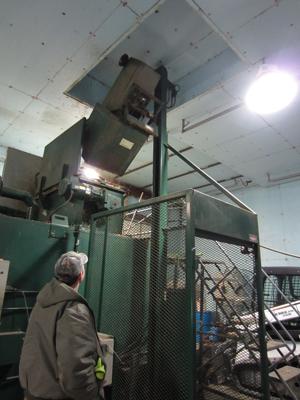 The compost system behind Robertson Field saves the college an estimated $51,000 annually by reducing food waste, according to Sustainability Coordinator Kelly Boulton.

The green machine, Pennsylvania’s first college-owned in-vessel composting operation designed for food scraps, composts about 1000 pounds of food each day, including paper compostables, raw kitchen food prep from McKinley’s and extra food from Brooks Dining Hall.
Acquired through a state grant nearly 11 years ago, the in-vessel composter and its operating facility cost $247,000 at the time of purchase, according to Boulton.

Other supplies were included in the compost operation purchase as well, including the building and cement pad where the composter now resides, according to Boulton.

“Because of the composter, I think we’re far ahead of other campuses when it comes to food waste,” said Boulton. “Certainly we waste some, but we turn it into a valuable fertilizer for the campus.”

Environmental Science Professor Rich Bowden said the process is not much different from his own at home composter. It’s just on a much larger scale.

“It’s a big meshed box and in it goes and I don’t care how long it takes to rot and every once and a while I just pull stuff out,” he said. “But here, we have so much going through that you want to make it happen a little faster.”

After each day’s worth of waste is mixed at the top of the machine, it is dropped onto one of 14 trays that rotate it through the composter as a solid block.
The process takes approximately 21 days because of the stainless steel machine’s internal temperature and moisture control. The compost is maintained at about 65 percent moisture and an optimal 132 degrees Fahrenheit, according to Rick Porter, compost operator.

Ten feet from the in-vessel composter is a “tea-brewer.”

“We actually put compost in there, and it runs on those fish tank pumps,” Porter said. “You add different food that makes the microorganisms expand. You’re flushing out the compost into the tea, just like a tea bag.”

He said the compost is also used as topsoil for the numerous construction areas on campus, and also in fertilizing the plants and trees.

“Our ‘back of the envelope’ calculation showed a $51,000 savings annually due to not having to pay hauling costs, not having to purchase chemical fertilizers or topsoil,” said Boulton.

Rick Porter is the compost operator. He said that the ratio of wood chips to food by volume is two to one, but because the food weighs so much more, there’s actually more food than wood chips. The average food tote weighs in at around 150 pounds. He’s had bins that were closer to 300 pounds, though the stress of the extra weight causes the bins to snap as they are lifted into the compost mixer.

“I have lost them into the mixer because they’re just so heavy,” he said. “So they’re only allowed to fill them so far, and that makes it so much easier because it would be hard to get enough wood chips into the machine to equalize 300 pounds of food.”

Every day, Porter drives around to each of the four loading docks and collects the food or paper filled “totes”. He said there are about 60 totes that circulate between the docks and the compost site each day. He said that in one day he typically picks up three or four totes from Brooks, one food tote from McKinley’s, and two or three compostable-paper filled totes from McKinley’s as well. He also picks up bins of animal remains from the rat labs in Carnegie and Steffee halls.

Both Boulton and Porter said that McKinley’s has too much paper waste for the composter to handle.

“If we have too much paper it just simply goes in the dumpster because there’s nothing we can do with it. It would just keep piling up there.” said Porter.
He said there has been talk of purchasing a shredder or grinder for all the paper waste, which would eliminate the need for local wood chips; however, too many students continue to throw glass bottles in the compost bins.

“Because if we get them in there and run it through a grinder, to make the paper less bulky, then we’re breaking that glass and there’s no way to get the glass back out of the compost because it would just keep getting finer and finer,” he said.