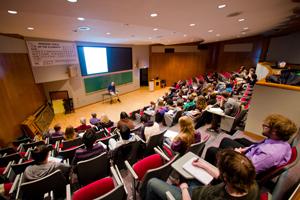 Environmentalist Bill McKibben led a workshop yesterday to help Allegheny students and local community members combat local environmental issues, as well as give advice on how to be better activists.

The activism workshop, hosted by Students for Environmental Action, focused on a local grassroots effort to prevent the construction of a tires-to-energy facility in Crawford County. McKibben used his past experiences organizing the non-profit 350.org to help students and local community members strategize a movement against the tires-to-energy company and any other issue about which they may be passionate.

McKibben, who has been called the “the world’s best green journalist” by Time Magazine, has gained international notoriety for the Keystone XL Pipeline protest in Washington D.C., which he organized. The Keystone pipeline is an export pipeline travelling currently traveling from Alberta, Canada to southern Illinois, Nebraska, and Oklahoma. The new expansion would add 1700 miles of pipeline, take a more direct route from Canada.

“I figured there must be a real core of good principled folks out your way,” McKibben said in an email.

SEA attended and contributed to several of McKibben’s grass roots organizations in the past and plans to in the future, said SEA president Maranda Nemeth,’12. SEA hopes to use the strategies from the workshop to begin starting their own campaigns.

“It’s getting advice from the best of the best. I hope coming out of it SEA and everybody will be inspired and feel that they have the capability and ability to confront issues,” Nemeth said.

As a professor at Middlebury College in Vermont, McKibben’s experience with students helped him understand the role of college campuses in the ongoing battle for a more sustainable planet.

“Colleges are key because so many people pass through them for a few years–so whatever happens there, good or bad, is highly educational,” McKibben said. “If you serve bad institutional food three times a day, that’s one lesson; if you serve good local food, that’s as important as any class. The same with everything from lights to boilers.”

Kelly Boulton, Allegheny’s Sustainability Director, is a part of the organizational committee that brought McKibben to campus. When discussing what speakers would fit well into this year’s theme of Sustainable Communities over a year ago, McKibben’s name came up as the top choice. McKibben’s organization 350 focuses on reducing the amount of carbon dioxide in the Earth’s atmosphere to a sustaining level of 350 parts per million. McKibben’s keynote speech concentrated on the science behind this number and what it means for the world, and our community.

“Our global community needs to be aware of what the science of climate change is and what the consensus is of where we are as a civilization,” said Boulton. “Allegheny is doing a lot about that. Our goal is to achieve climate neutrality by the year 2020. We’re doing this by retrofitting lighting, switching electricity, and many other things so we as an institution are reducing our carbon footprint.”

Nemeth hopes that more students will begin to organize, not necessarily for a more sustainable community, but for what they believe in.

“I hope that students have that confidence to achieve change. That they organize correctly and these strategies, they can bring people together, speak up together, and be an activist,” Nemeth said. “That’s how I hope people feel when they leave.”

McKibben wanted to leave students with confidence that cooperation is a key to success in being an activist.

“I want them to know that they’re powerful—that working in solidarity with others they can make a real and meaningful difference,” McKibben said. “Global warming seems such a huge problem that it’s hard to imagine you can make a difference. And by yourself you really can’t. But with others? For sure.”