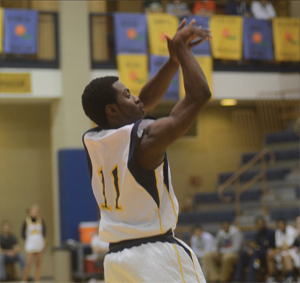 Junior Devone McLeod struggled on Wednesday night, playing only 16 minutes and failing to score. McLeod did have three assists in the Gators’ loss to Hiram. CHARLIE MAGOVERN/THE CAMPUS

Men’s basketball dropped a road conference game to Hiram on Wednesday, 83-68. The Terriers, led by Jamaal Watkins and Alan Sheppard, outpaced the Gator defense, especially in the second half, with a torrid 68 percent from the field in the final period.

Head Coach Jim Driggs said he was not pleased with the defensive performance.

“Our defensive energy was not good last night,” said Driggs. “Give all the credit to Hiram. They’re good, but we could have done a better job in our man to man defense in terms of pressuring people.”

“It was probably one of the worst defensive performances of the year,” said McLeod. “[Coach] Driggs warned us that we could not let Hiram score in the eighties and expect to win.”

On the other side, Hiram was able to capitalize defensively, outscoring Allegheny 23-12 on points off turnovers. Hiram’s high pressure defensive schemes proved costly against the Gators who struggled to find any sort of rhythm or tempo offensively against the Terriers.

“We beat [Hiram] last time because we controlled the tempo of the game,” Driggs said. “We didn’t do as good of a job executing the game plan and they got us out of our rhythm.”

One of the bright spots for Allegheny was the efficient play of James Ness, ’12 . He finished with 23 points, a team high for the night, along with Ryan Stanko, ’14.

“Hiram doesn’t have a great inside presence, so the guards did a really good job of getting me the ball inside,” said Ness. “I think their press rushed us into the kind of shots we didn’t want to take.”

The Gators never led in the game, while Hiram jumped out to a 17-5 lead just over midway through the first half. Allegheny snuck back in the game aft er a three pointer by Stanko cut the lead to four. Hiram then went on a 9-0 run and closed out the half on top of the Gators by 11. Allegheny trailed by double digits for the majority of the game.

Allegheny will play host to Denison this weekend. The Gators defeated the Big Red earlier this season on the road, 64-62. The Gators are a game out of the NCAC tournament right now behind Kenyon. Each squad has three games left including a meeting of the two teams on the last day of the regular season. Tip off against Denison will be at 3 p.m. Saturday.