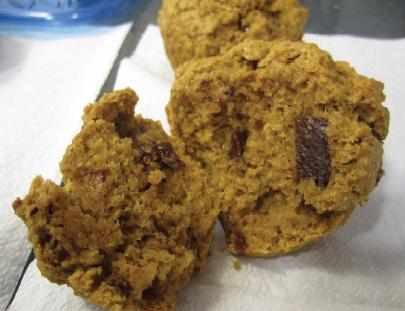 It had been too long since I had baked last. As the semester began, chaos ensued more quickly than I imagined it would, and without a specific reason to bake, I did not take the time to do it.

But the minute an occasion arose, I seized the opportunity. A few people from a poetry class last semester wanted to continue to meet and workshop poems this semester on our own time. Some of you may want to laugh, so go ahead now. Yes, we are doing this for fun, for our own sense of well-being, which sounds a little like baking, too, though doesn’t it? We also scheduled it for Saturday mid-afternoon—aka late enough to sleep in and still have time to bake.

After doing a bit of recipe research—the best kind of research—online, I discovered plenty of desirable baked goods, but landed on chocolate chip coffee muffins. Writers and coffee seem to go hand-in-hand. And chocolate has caffeine, too.

The recipe called for chocolate chips, and instead of going to the store, I just bought two Hershey’s chocolate bars from McKinley’s Food Court.

I never seem to completely follow a recipe, and that’s okay. They can be altered as much or as little as you want, according to your ingredients and your taste.

Preheat the oven to 400 degrees Fahrenheit.

I would suggest combining those ingredients in that specific order. Because I was trying to mix these ingredients in a small bowl, I added the milk last. That was a bad idea. The other ingredients formed a thick paste-like consistency that turned out to be incompatible with the liquid. It formed awful, brown, floating clumps in the white milk.

Suffice it to say, I threw that out and started all over again, combining the ingredients in the proper order the recipes called for. Granted, the mixture wasn’t exactly smooth, but it wasn’t nearly as disgusting.

Add the milk mixture to the flour mixture.

Grease your muffin trays with something like PAM or just butter. I’m still reusing the disposable aluminum trays I bought last year. Fill each muffin cup and bake for 18 minutes, or until a toothpick (or fork) comes out clean.

Goodness gracious, did they smell delicious. My batch made 12 muffins.

And so, we made black tea with creamer and then munched on chocolate-coffee muffins while we read poetry. You know you’re a little jealous.

I, for one, didn’t know if they had enough flavor. Consumers told me I was wrong. Though one did suggest they could have been sweeter. I think I liked the fact that they weren’t all too sweet. Bitter just like coffee. Bitter just like me.