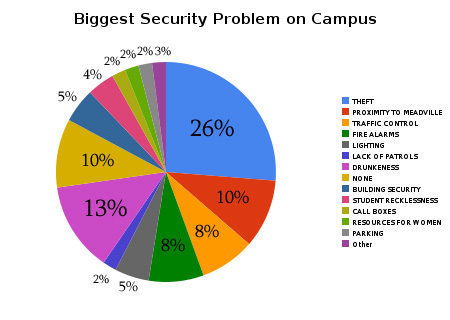 Despite the results of a survey recently conducted by The Campus indicating that students feel very safe at Allegheny, much of the college maintains concerns and reservations about security-related issues at school and the Office of Safety and Security’s efficiency in handling these issues.

The survey, in which 100 students were interviewed, showed that 96 percent of those students feel that Allegheny has a safe campus and the remaining 4 percent believe it to be relatively safe.

Jinnie Templin, ’11, was in the Campus Center with some of her friends at 2 a.m. last Saturday when a food fight broke out. After her departure, several more food fights erupted as well as a physical fight and the appearance of two streakers.

The following morning when Templin returned to the Campus Center, she was approached by a McKinley’s worker who told her about the previous night’s events and the difficulty they had contacting security to help them.

“They couldn’t get safety and security to come up here unless they called, like, 15 times in one night and said there was going to be a brawl that was going to send people to the hospital,” Templin said.  “I was here for an hour and I didn’t see one security guard.”

In another incident, when a bus full of Allegheny students broke down on the highway on its way back from a school-funded trip to Cedar Point Amusement Park, the first thing the students thought to do was call campus security.

“We called Safety and Security and they said they had absolutely no idea how to help us,” said Liza Cooper, ’12. “They said, ‘We’ll call you back, we don’t know what to do,’ and they never figured out a solution. They could’ve come picked us up, anything.”

The group eventually called the police department, who assisted them in finding a tow truck for the broken vehicle.

“I don’t want to color our whole perception of them because maybe they do an efficient job, but that’s just one example of where they’re lacking,” Cooper said.

Other students see the safety and security officers in a much more positive light.

Dominic Meyer, ’12, has been a student employee at the Safety and Security Office for the past two years.

“I think most people look at Security like they’re out to get you but realistically, they’re there to, you know, lock up buildings, give escorts, take reports if something happens,” he said. “They’re really not out there to be the bad guy.”

According to Meyer, the atmosphere in the office has improved significantly this year with the hiring of Jeff Schneider, the new director of Safety and Security and assistant dean of students.

“It’s actually like night and day,” Meyer said. “The old director was never there, he’d be out of there by three, two-thirty.”

In comparison, Schneider often stays in the office late to get work done and is much more open with the student workers, Meyer said.

Schneider gets his experience from 15 years working in campus security in the University of Pennsylvania schools.

“My role, I see, as the newly-hired director, is to do a safety and security review of the campus constituency and then see what the best fit is for the campus and then make my proposals,” Schneider said. He plans to make his evaluation using his past experience and knowledge of security and by comparing Allegheny’s security procedures to those of other colleges.

“I’m still in the honeymoon period, a transitional phase,” he said. “But from what I see the campus environment is as safe as any campus nation-wide.”

One of the largest and most pressing security issues currently at Allegheny is theft.

According to the survey, 26 percent of students think that theft is the biggest security-related problem at Allegheny.

“It is a major issue right now,” Schneider said.

There has been a recent increase in reports of stolen furniture from campus buildings in addition to petty theft. A list of stolen campus property includes couches and chairs from the Campus Center and North Village, a computer monitor from one of the music rooms and a four-foot decorative spoon from Brooks Hall.

Schneider encourages the community to report the crimes they see because everyone pays for them; the money to replace stolen furniture comes out of students’ tuition.

“If someone’s responsible, let them dance to the fiddler and pay the price, not the innocent students,” he said.

Other student security concerns, according to the survey, include rowdy, drunken behavior, the threat the proximity of Meadville and Meadville residents poses to students and the faulty fire alarms in some buildings.

Schneider says that there are a lot of aspects of Allegheny’s security that he wants to evaluate. He is working to assess how well-lit the campus is, as well as looking into the benefits of installing a Closed Circuit Television (CCTV) system.

“When you have manpower resources to consider, the CCTV example is a perfect example to consider because that’s a lot of extra eyes out there now,” he said. “It can only benefit a college campus.”

In conjunction with the Physical Plant and Residence Life, Schneider has also revamped Security’s key-lending program. Similarly, he has updated the organization in the security office and worked to systematize its filing methods. He is also initiating many fundamental changes among the security officers.

“The first thing I did, I spent the first month meeting my staff and assessing their needs and doing appraisals on how they did their job previously and what direction we want to go,” he said.

Schneider also plans to make it mandatory for his officers to engage in training updates and to receive National Incident Management System training in case of catastrophic emergencies, as well as updated First Aid, CPR and AED training.

Even without this training, Meyer, after working closely with the Office of Safety and Security through his campus job, views the officers as well-versed and experienced in carrying out the demands of their post.

“I think they do things very efficiently,” Meyer said.  “They’re on top of it.  They know what they’re doing, believe it or not.”