Carr renovations to finish by summer 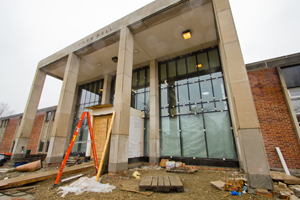 The rennovation of Carr Hall, which began in May 2011, is on schedule to be completed late this semester. The newly organized facility, which houses departments of environmental science and physics, will be ready for professors and students in fall 2012, said Physical Plant Assistant Director Brian Gillette.

The project, made possible by a grant from the Eden Hall foundation, will vie for a LEED certification. A newly transformed lobby will feature planting beds with an aquaponics system and a wall covered in vegetation, called a “green wall,” Gillette said. The contractor, Massaro Corporation, also built North Village II, which achieved LEED Gold certification. According to Gillette, Massaro executed the project’s details well. “It’s fairly straight-forward for [Massaro], but there are several details that they have to make sure they pay attention to,” Gillette said.