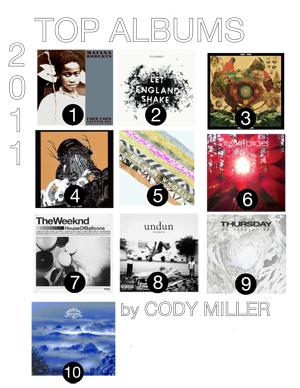 1. COIN COIN CHAPTER ONE: GENS DE COULEUR LIBRES by MATANA ROBERTS
Matana Robert’s Coin Coin Chapter One: Gens de Couleur Libres is an experience nothing short of exhausting. Backed by a 16-piece ensemble, Coin Coin is rife with tense, visceral instrumental flourishes, which only magnify the sheer tension underlying these pieces. Roberts’ pieces impose weighty, unavoidable questions upon the listener, forcing one to, in some sense, confront his or her past conception of African-American history and the racial dynamics of modern American society. No album this year provokes as much thought nor elicits such a maelstrom of emotions as this avant-garde masterpiece.

PJ Harvey is the epitome of a great songwriter for this particular reason — she is constantly evolving. With her eighth studio Let England Shake, she reaffirms this, with a collection of twelve harrowing, brilliant pieces, expounding upon the sheer destructiveness of war and British national identity. Harvey manages to sound more like a journalist than a protester with lyrics that read more like vivid, eloquent diary entries than blatant political statements. She handles the subjects with grace and a sense of unaffected authenticity.

Fleet Foxes front-man Robin Pecknold muses about the trappings and misgivings of adulthood on the Seattle folk group’s superb impressive sophomore release Helplessness Blues. While in some ways sounding like a rustic, aged piece of Americana, the album simultaneously creates a world that is so timeless, so ethereal and so endearing that it seems like it could go on forever. Fleet Foxes has managed to craft a masterpiece of American folk and breathtaking ambition, far eclipsing their already stellar self-titled debut.

4. THE BIG ROAR by JOY FORMIDABLE

At a time when anthemic, arena rock seems so unfashionable, Welsh trio The Joy Formidable craft a defiant ode to grandiosity with their debut album The Big Roar. But what’s so striking about this debut is not the band’s unapologetically grand ambition, but rather how they situate it within the context of front-woman Ritzy Bryan’s downright heavenly vocals. She is a master of the pop hook, and while never fully reveling in this forte, Bryan uses this ability to create pieces which, while lengthy and epic, seep into the psyche of the listener.

On her second release, W H O K I L L, Merill Garbus (a.k.a. tUnE-yArDs) deftly infuses elements of afrobeat, R&B, folk and electronica into a surprisingly cohesive whole. Yet, Garbus is never eclectic for solely for the sake of being eclectic. Beneath the album’s volatility is a striking sense of grace. Garbus accomplishes the high task of rendering her multifaceted work accessible by discerningly drawing from this diverse range of genres. As a result, Garbus crafts W H O K I L L into a penetrating, singular artistic statement.

With Empros, Chicago-based post-metal trio Russian Circles have put out a release that sounds nothing short of a revelation in a genre, which has drifted into creative stagnation and at times, near-pretentiousness. While the Circles’ spirited, cathartic mini-symphonies are carefully calculated and meticulously constructed, the band displays a sense of immediacy which feels so raw and open that the album sounds at times as if it was recorded impromptu in a cramped rehearsal space. It is this balancing act between visceral free-ness and subtle virtuosity that places Empros amongst the finest post-metal releases of recent years.

7. HOUSE OF BALLOONS by THE WEEKND

This semi-anonymous mixtape by 21-year old Canadian vocalist Abel Tesfaye is perhaps this year’s most promising debut. Tesfaye juxtaposes his fervent and at times sensual vocals against engrossing, murky aural and lyrical landscape that feels refreshingly singular amongst the plethora of trite R&B releases this year. Graphic, intense, and alluring, Tesfaye’s songs create an engrossing world.

Easily the best commercial hip-hop release of the past year, the Roots construct their magnum opus with their eleventh studio album Undun. Few albums manage to successfully channel the sort of ambition found on Undun, and even fewer, do so in a manner that seems to natural and effortless as the pieces of this release. Never before has the band sounded as cohesive, organic, and self-assured, and in this sense, Undun embodies the spirit of the Roots better than any release before it.

9. NO DEVOLUCIóN by THURSDAY

Thursday’s No Devolución is the sound of a band desperately pushing itself to write the best record it could possibly make and succeeding. More so than anything, No Devolución is a bold statement to the nested potential of a band marred by a catalog of overly angsty, mediocre, melodramatic releases. Thursday does not abandon its core sound. But, for the first time, the caliber of songwriting is so great and such angst is articulated so poignantly, that the band creates a piece that not only sets a new standard for themselves, but also for their respectively genre as a whole.

10. DIOTOMA by KRALLICE
On Diotima, black metal quartet Krallice wage an all-out assault. As with their previous releases, Krallice keeps to their characteristic brutish and gruelling roars and swift, pummeling guitar interplay. While the band has always favored the vile over the pure, Diotima has a uniquely atmospheric and, at times, progressive tinge that illustrates their willingness to take significant artistic leaps, even if it does make the band sound somewhat out of place at times amongst many of their black metal counterparts.

HURRY UP, WE’RE DREAMING
by M83

SMOKE RING FOR MY HALO
by KURT VILE