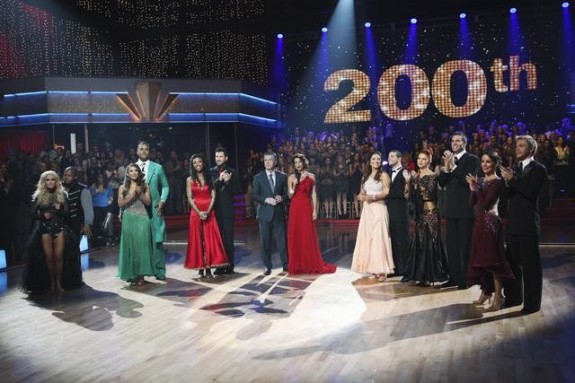 There’s only one stage in America that could bring the Palins and the Osbournes together, and that show is celebrated its 200th episode of celebrity misfits: the “Dancing with the Stars” (DWTS) ballroom was filled with a unique variety of former celebrity contestants Monday night on ABC, and it wasn’t without the B-List shenanigans we all expect from reality TV.

Olympic Gold medalists Kristi Yamaguchi and Apolo Anton Ohno returned to face off as leaders in a team dance-off competition.

Team Apolo had an obvious unfair advantage (since he got to pick his teammates first) by competing with the two highest-scoring celebrities of the season – singer Brandy and actress Jennifer Grey.

Although the level of competition was intense, stars lightened the mood. Disney channel star Kyle Massey, (“Cory in the House”) for instance, whose less-than-perfect physique has made him a laughing stock this season, drew a six pack on his stomach to look like former contestant Mike “The Situation” Sorrentino, who was voted off week four.

“The Situation” wasn’t the only celebrity the remaining contestants tried to channel. For the night’s individual dances, the final six were challenged to re-create some of the most memorable routines from the past ten seasons.

As if that wasn’t nerve-wracking enough, they had to be judged by the celebrities they were trying to imitate.

Osbourne, with her new blond hair and svelte physique, was almost unrecognizable. With her new look came a newfound confidence, which at times morphed into arrogance. For instance, after getting past the irony of Bristol Palin channeling the more liberal Osbourne, the latter told the pro-life activist she had “big shoes to fill” after performing one of the singer’s unforgettable dance from season nine.

Brandy, one of two stars who have topped the leader-board throughout the season, received a little more laud after providing the attitude and the technique to re-interpret “Brothers and Sisters” star Gilles Marini’s sensual foxtrot from season eight.

Dancing to “Fever,” she received deservedly high praise from the judges for her steamy routine. The singer, who admitted she’s been struggling with self-esteem lately, was encouraged by judges’ comments and scores.

Jennifer Grey, the oldest competitor of the season at 50 years old, got a confidence boost of her own from the judges’ opinions.

The actress most known for her “Dirty Dancing” performed a clean and crisp routine that ended the night on a high note.

In the past couple of weeks her age seemed to catch up with her as she failed to keep up her momentum.

She may not be doing eagle airlifts with Patrick Swayze any time soon, but Baby still proved she could still fly on Monday with her powerful and passionate tango.

The night’s close competition ended in a tie between Brandy and Grey, leading the pack into next week’s quarterfinals.

Tuesday night the dancing celebrities of now and then returned, along with Taylor Swift and Rod Stewart, who lent their vocal talents to the festivities. But, the fun ended when host Tom Bergeron got to the results – a moment almost as pulse-pounding as the midterm elections.

NBA star Rick Fox may have earned his best scores of the season Monday, but the athlete was the latest celebrity to be voted off. His being let go wasn’t much of a surprise, however, considering his popular competition.

It also didn’t help that his girlfriend, actress Eliza Dushku, joined him in the practice studio this week, breaking women’s hearts across America as they realized the stud was not a bachelor.

Although Fox and other former contestants danced their last routine on the DWTS ballroom this week, the 200th episode extravaganza proved that no one puts these stars in a corner.