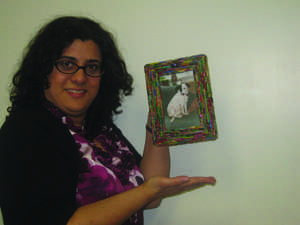 Originally from western Illinois, Zachary Callen says Meadville is the most rural place he’s ever lived in. But as far as universities go, Allegheny College isn’t the smallest he’s seen.

Assistant professor of political science Zach Callen arrived at Allegheny last semester from the University of Montana-Helena, where he’d been teaching for the previous two years.

“[Helena] was about half the size of Allegheny,” Callen said. Although he and his wife liked the town, it was not where they envisioned themselves living in the future.

Callen said he was impressed by Allegheny’s students, faculty and location. He also really appreciated that the College supports faculty writing and research.

Callen said that he is very happy at Allegheny thus far. “The students are bright, they work hard, they’re pleasant to interact with,” he said. “Earnest is a good word to describe them.”

Matt Ferrence is an assistant professor of English at Allegheny, specializing in creative nonfiction and American literature, with a particular focus on Appalachian literature.

The size and interdisciplinary focus of Allegheny was appealing to Ferrence.

“I was teaching at IUP the three years before I came, and I teach as many students now as I would have taught in just one class at IUP,” he said.

Last semester, Ferrence also participated in the Single Voice Reading Series, sharing from his own various projects. One essay he read aloud was from a collection of golf essays, which took place in Arizona, where he used to live. One recounted an experience he once had while golfing with two men that attempted to cross the Mexican border.

“It was one of those situations where you end up being involved whether you want to be or not,” Ferrence said. When he waved to the men in greeting, they fled. Later, he saw them being escorted away by border control and realized he’d inadvertently flushed two men out.

“I have spent time at many English departments and universities, and this is by far the most authentic,” he said.

Overall, Ferrence said he’s happy here and that he would like to stay at Allegheny permanently.

“My radiator’s a little chipped, but besides that I don’t have any complaints,” he said. “The blush still hasn’t gone off the rose.”

“I tend to be a misanthropic homebody, so Meadville is as good a place as any,” he said.

Though English’s specialty is in early 20th century European art, he teaches art history beginning from the 16th century up until modern times.

Originally from Butler, PA, English had lived in New York since 2006 and came to Allegheny after deciding that it would be nice to be close to home.

He added that the other member of his household has also adapted well to Meadville.

“My family consists of a cat named Wooby, and he hasn’t complained much about our new dwellings,” English said. “He has more windows to sit in and a longer hallway to run down, so he’s happy.”

English will only teach at Allegheny for the year, so he said he hasn’t been too concerned with integrating into the faculty-at-large. However, he said he has really enjoyed getting to know the art department faculty.

Samira Mehta’s year has been full of lots of hard work. That’s because she’s here at Allegheny to complete her dissertation, entitled “Beyond Chrismukkah: A Cultural History of the Christian/Jewish Blended Family from 1960—2010.”

As Allegheny’s Diversity Dissertation Fellow and Humanities Scholar-in-Residence, Mehta has kept busy both working on her own project and teaching a class: Religion in American Life. She attended Swarthmore College in Pennsylvania, so Allegheny’s small liberal arts environment feels almost like home to her.

“The faculty has been very welcoming, and I’ve been making new friends,” Mehta said. “The support I’ve been getting from the faculty members has been fabulous.”

Mehta said that overall she has been very well taken care of here at Allegheny. She has been able to devote a lot of time to her own work.

“[The Fellow positions] is a very generous opportunity that the school offers,” she said.

Mehta’s dissertation explores how it is that American society talks and thinks about interfaith families, and how that affects the kinds of religious lives available to those families. She is also examining how those trends have changed during the past 65 years.

On February 20 Mehta will be giving an open talk on her dissertation research in Campus Center room 302 as part of Allegheny’s monthly faculty lecture series.