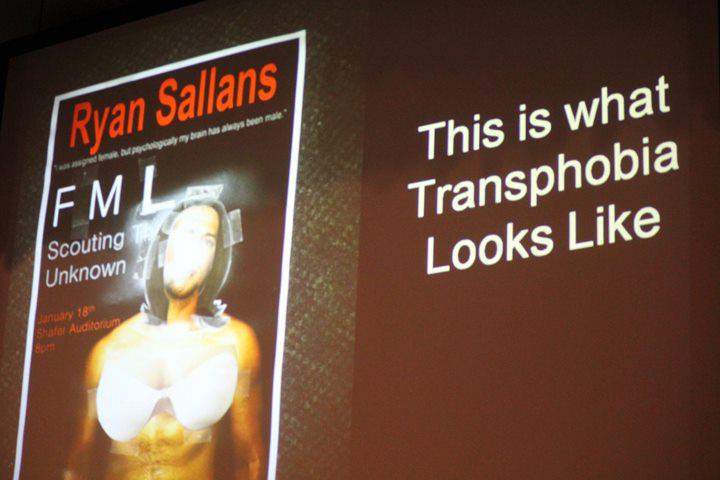 Ryan Sallans, who speaks around the country on transgender issues and his own transition, was welcomed to Allegheny by this bit of vandalism. JOHN HEIM/THE CAMPUS

Around 2 p.m. today, Dean of Students Joe DiChristina sent out a campus alert via email to the student body informing them of an “incident of discriminatory harassment” in which a poster promoting a professional speaker who addressed the campus about transgender issues was “defaced.” Here’s a bit more detail:

– The poster was of Ryan Sallans, who spoke Wednesday night in Shafer Auditorium about his transition from female to male.

– Sallans showed a photo of the defaced poster in his presentation, treating it as a learning experience. He said that it hurt, but that he was “thick-skinned” and that he liked Allegheny’s campus nonetheless.

– The above photo is from Sallans’s presentation. It’s a bit hard to see, but someone taped a female wig on Sallan’s head and a makeshift bra to his chest (Sallans had breast removal surgery as part of his transition).

As DiChristina said in his email, this act is considered a hate crime under Pennsylvania law. He hinted that “educational opportunities to raise awareness about transphobia” would be provided by the IDEA office in the future, but no further information was given.