College Democrat rallies for sanity and lives to tell the tale 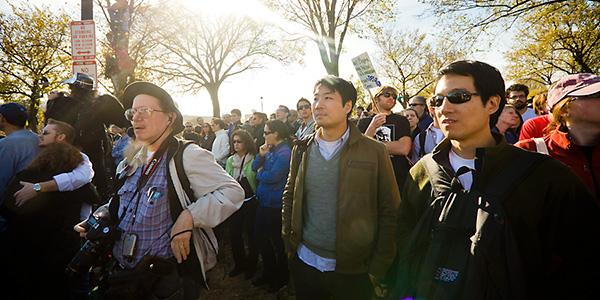 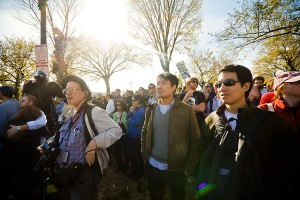 Onlookers anxiously await the appearance of Jon Stewart and Stephen Colbert, the men behind the rally. Cody Miller/THE CAMPUS

There we were, twenty sleep-deprived College Democrats all but spooning on a D.C. Metro train so packed we had to stack the children to make room.
Over the intercom a barely audible voice let us know the next stop is Smithsonian Station. The train erupted with cheering, and those people who could move their hands clapped.
After riding the metro for an hour, a bus for five hours before that and being spending two hours in a car before that, knowing we’d be mass-transit-free for a while meant a lot.
We got off the metro and onto the escalator. This was it. The reason we woke up so early this morning was at the top of this escalator.
And as we squinted up into the light from the surface like Chilean miners, the feeling of finally arriving couldn’t have been more tangible.
We walked down the National Mall with purpose, sporting our baby-blue College Dems T-shirts and various non-offensive signs, the least intimidating gang in America.
In addition to us, there were also a couple of other people at the Mall — around 215,000 people, according to the latest estimates.
Purely as a reference, that is about 2 1/2 times the size of Glenn Beck’s rally, which was estimated at 87,000 (or according to Fox, one thousand-bagazillion).
Watching “The Daily Show” is something I normally do alone, so it was incredible to, for once, watch it live with 214,999 other people who seemed to have similar grievances.
In addition to people, we also noticed the ample amount of potent political signs, such as: “My Arms Are Tired” or “Is This the Line for Justin Bieber Tickets?”
The first two hours of the rally were filled with alternating music and comedy acts that involved stars like The Roots, Yusuf Islam, The Mythbusters and Ozzy Osborne.
At one point Stewart and Colbert combined music and comedy when they donned matching American flag zip-up fleeces and sung, “There’s No One More American Than We” as a duet.
Yes, it was beautiful.
After that, there was the much-anticipated pseudo-debate between Stewart’s Sanity and Colbert’s Fear. Eventually, Colbert (and his giant papier-mâché puppet) were vanquished.
But this was all just hype before the main event. When Jon finally came out onto the stage with a microphone in hand, we knew he was getting down to business.
Finally, an answer to the thousands of times we’ve all wondered, “What does Jon really think?”
It’s hard to imagine the impossible height of the crowd’s expectations in that moment. Those expectations were met. 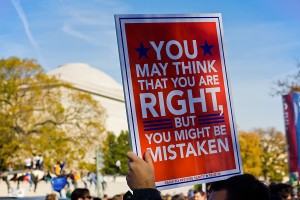 Staying true to form and cause, Jon proposed that maybe the condition of the nation is not as hopeless as party extremes would like us to believe. He made an important distinction, stating “We live now in hard times, not end times.”
He went on to explain that in real life, our values make the foundation that allows us to work together as Americans “every damn day,” but for whatever reason, there are two places where that is not the case – Congress and the 24-hour media cycle.

Both subvert these same values to build walls between Americans and divert attention away from real issues.

“The press,” Stewart said, “can hold its magnifying glass up to our problems, bringing them into focus, illuminating issues heretofore unseen — or they can use that magnifying glass to light ants on fire and then perhaps host a week of shows on the sudden, unexpected dangerous, flaming ant epidemic.”
The message was, as Stewart’s messages always are, well-received by the crowd. Unfortunately, I have a feeling it will never reach the ears of those who really need to hear it.
Perhaps the only change is that Keith Olbermann, in response to the message at the rally, has suspended his “World’s Worst” segment.
We can only wait, and hope that the rest of the world “takes it down a notch.”