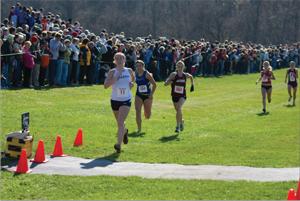 Kristina Martin, '14, earned an individual at-large bid to the NCAA Championships this Thursday after earning the highest finish for an Allegheny runner at the regional meet since 2005. ED MALLIARD/SPORTS INFORMATION.

The men’s cross country team will head to Nationals for the second consecutive season this Thursday led by Head Coach Brent Wilkerson.

Ranked 18th in the national poll during the regular season, the Gators earned an at-large bid after earning a third place finish in Regionals this past weekend.

Junior Bobby Over was the individual champion of the race, while the squad placed two additional runners in the top 11.

“Bobby was lights out,” said Wilkerson. “I saw him pull up into first place, second place spot within the second mile and I knew from there he wasn’t going to be lower than third. He just got this determined look on his face and he looked really good through three miles and heading into the woods, I knew he was probably going to be the favorite to come out.”

The Gators will also bring Kristina Martin to Nationals, who earned an at-large individual bid on the women’s side.
“I knew going into Saturday’s race that I could realistically have a shot at going if I gave it my all, and in the end, it panned out,” said Martin.

Wilkerson credited Martin’s performance throughout the season to her ultimate success.

“Kristina has probably been the most consistent woman all year long,” said Wilkerson. “Even as a sophomore she’s racing really intelligently. She goes into each race with the mentality that she’s going to do better and you can see it in her races throughout the season.”

While impressive, the performances of Over and Martin alone were not the only success story of the weekend.

“Our plan was to have our top three guys in the top 20 and then seeing all of them almost come into the top ten, you knew team was running well,” said Wilkerson. “The crowd couldn’t stop talking about Allegheny.”

Ranked sixth in the region at the outset, the team’s third place finish came as a surprise continuation of the program’s past success.

“I’m thankful that we are able to continue Allegheny cross country’s championship tradition even in what was supposed to be a rebuilding year,” said junior Mike Vlah.

This season is Coach Wilkerson’s second, after he served as an interim head coach for the Gators last year. Wilkerson praised former head coach Bill Ross for aiding in the transition.

“For successful programs like this it was extremely helpful to have had the groundwork laid down by Bill Ross. There are some big shoes to fill.”

Wilkerson also credits his runners for the recent achievements of the program.

“I’m extremely proud of this group,” said Wilkerson said. “They handled the scrutiny of whether or not were going to still be a top tier program in the country. I mean that says a lot about the guys on our team that they want to improve themselves. They want to continue the success that we’ve had.”

Headed into the weekend, the Gators will look for another impressive performance by Bobby Over in addition to strong efforts by Vlah and Jack Denison, ’13.

“I think Mike Vlah is really going to need to step up and he runs fast on flat courses, which this is an extremely flat course. He struggled a little bit at the regional course, so I think he is going to be headed into this race hungry to do better and help his team out more. We need a repeat finish from Jack Denison, our fifth runner. We need that combination.”

Denison will be running at Nationals for the first time this season, and looks to build on a positive sophomore campaign.

“It is a new and exciting experience that I am looking forward to,” said Denison. “It feels great to continue to build on the success of the program. It really says a lot about the team this year.”

Wilkerson expressed confidence that his team, and Martin, have what it takes.

“I think they know that if they do a good job, they’re going to set themselves up for a top ten performance which is really what we want.”

Heading to Wisconsin on Thursday, the team’s mission is simple.

“I’m looking to go out and do what I always do,” said Martin. “Run my hardest and let the results speak for themselves.”