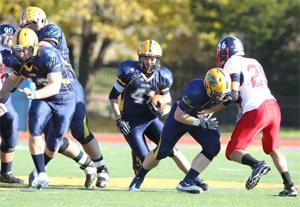 The Allegheny football team put together their most complete game of the season to dismantle the Hiram Terriers 44-14 last weekend.

With the win, the Gators improved to 5-4 overall and 4-3 in NCAC play.

After just two plays the Gators found themselves up 7-0 capped by a 5-yard touchdown run by Senior Brian Tamburlin. The Gators never looked back, as they led 28-7 at halftime.

The offense had 473 yards, a season high, led by the running game, which had 239 yards. Normally not a strength of the Gators, Coach Mark Matlak attributed the success this week to the offensive line.

”When you rush for that many yards it is about blocking first,” said Matlak. “Give kudos to the offensive line. They made the running backs job easy.”

Quarterback Jordan Fowler also continued his strong play in the second half of the season going 17-25 for 234 yards and three touchdowns. His favorite target was wideout Matt Griffith, who had 5 receptions for 116 yards and two touchdowns.

The defense also had a solid game, allowing the Terriers only 167 yards and 2.9 yards per play. Senior Travis Wilkins recorded his second interception of the season and junior John Douglas recorded four tackles for a loss to pace the defense.

The special teams proved dominant throughout the matchup. Senior kicker Ryan Zipf converted three of four field goals including kicks from 43, 25, and 23 yards respectively. Senior Andrew DeJong had to punt only three times, but averaged a solid 40.3 yards per punt, with one being downed inside the 20. The return game was also strong for the Gators as freshman Derrick Emigh had four punt returns for 86 yards and senior Blake Lyle had one kick return for 48 yards to set up the first score.

“Everyone did a great job blocking, and I would like to give most of the credit to them,” said Emigh. “I love returning punts and it felt good being able to run around the field.”

This weekend, the Gators close out their season against the Oberlin Yeomen, who enter the contest with a 2-7 overall record and are 1-4 in NCAC play. Despite their record, Allegheny knows that to win they must prepare like they would for any other week.

“We must do a great job of preparing during the week,” said Matlak. “If we bring the effort and toughness that we displayed last week we will have a chance to be successful this week.”

This weekend’s matchup against Oberlin will be the last game for seniors, which will add even more motivation to end the season with a win.

“In regards to my last game, it is going to be a special moment,” said senior Sean Griffin. “The 29 seniors who have made it to this last game have given a lot to this program and getting a win would mean a lot to each of us. Football is one of those games you cannot keep playing so having had the opportunity to play for four more years has been a blessing.”