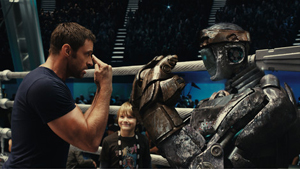 Hugh Jackman plays Charley Kenton, a washed-up boxer who tries to reclaim some glory at the World Robot Boxing championship, in 'Real Steel.' The reviewer was impresssed with the film's use of digital animation. STARPULSE.COM

With a lot of punch and only some of the expected, “Real Steel” is well worth your time.

The film, directed by Shawn Levy, combines the nostalgic and inspiring feel of a sports movie with some high tech upgrades and a genuinely warm back story that make it a truly entertaining and innovative spin on the typical action flick. Although a bit predictable, the film is still able to deliver the big hits and happy ending to make it a solid watch.

Hugh Jackman plays Charley Kenton, a washed-up boxer and small-time robot fight promoter that has run out of luck. After getting his last machine junked in a rodeo stunt in small town Texas, Charley is tracked down by custody officers who inform him that his ex-wife has died.  The news throws Jackman together with the surprisingly charismatic Dakota Goyo, who plays his 11-year-old son, Max, and then the real fighting starts.

As the two begin their journey towards the World Robot Boxing title the film begins to drift into a typical action movie feel. Montages, family bonding and sweatsuits mark the typical heroic journey towards the championship. They eventually take their undersized and unskilled robot Atom from the bottom of the junkyard heap to the height of robotic boxing, all the while growing closer together as father and son.

The plot of “Real Steel” itself is unremarkable. However, the flashy special effects and fight coordination supplemented by a strong supporting cast make it a successful reinvention of action movie nostalgia.

The robots themselves are excellently animated. Huge and imposing with a variety of different fighting styles and appearances, the bots are very entertaining to watch do just about anything. The near-gore that robotic fighters allow the filmmakers to get away keeps the dismemberment and decapitation in the film without the stigma of an R rating.  Dripping with mechanical fluid, limbless and sometimes headless the bots beat each other in brutal and fast-paced fights to the death that keep the audience hooked.

The heartthrob of the film is Evangeline Lilly of “Lost.” Lilly plays the supportive and long time friend of Jackman who ends up falling for him at the end of the film.The rest of the cast is filled out with skilled character actors. “The Hurt Locker’s” Anthony Mackie, modern action must-have Kevin Durand and believably evil Olga Fonda fill out the ranks to make sure Jackman and Lilly aren’t out there alone.

At face value “Real Steel” is just a glossy and high tech remake of Rocky with more girls and way more robots. However, despite its simple nature the film delivers the character development and nuanced reinvention that make it a solid 7.6 out of 10 on IMDb.com. It’s truly rare that you can grab some friends and go watch robots fight each other and feel good doing it — so don’t let this opportunity slip away.