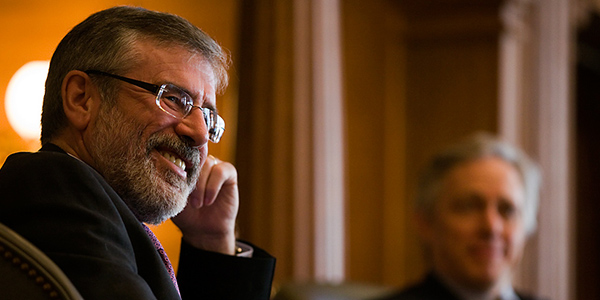 Gerry Adams, president of Sinn Fein, the largest political party in Northern Ireland, held a discussion yesterday addressing the international issue of conflict resolution. Adams’ work in creating a sustained peace between Northern and Southern Ireland is a rare but exemplary model of successful peacekeeping.
The talk, a part of the Year of Global Citizenship, was mediated by Associate Professor of Psychology Joshua Searle-White and was held in the Tippie Alumni Center.
“This happened within the last two or three weeks, so for us it was just a surprise, and such a welcome one, that President Mullen was able to orchestrate his [Adams’] visit,” said Associate Professor of Political Science Shannan Mattiace.
Adams, who will only be in the U.S. through Friday, made his stop at Allegheny before traveling to New York for the Friends of Sinn Fein Annual Dinner, according to Sinn Fein Representative to the United States Rita O’Hare.
“He [Adams] is a very significant figure, and I think fitting for the Year of Global Citizenship,” said President Mullen. “I hope that one of the lessons of this year is the responsibility that comes with global citizenship.”
For Adams, the purpose of the discussion was to educate and answer questions about the conflict in Northern Ireland and how it can be seen as an example of conflict resolution for the rest of the world, explained Richard McAuley, a representative of the Office of the Sinn Fein President.
“It’s important to reach out to that generation who will be the people making the decisions when we’re still struggling back in Ireland,” McAuley said. “No college is too small, they’re all important.”
The talk was framed as a question and answer session between the audience and Adams. The topics that were raised ranged from the current political climate of Ireland to the importance of the Irish language and culture.
During the discussion, Adams stressed the importance of open conversation between individuals, opposing parties and the international community.
“If you were to put up a blackboard and you were to summarize what is required [for conflict resolution], what I would put on the top of the list is dialogue,” Adams said. “It’s only when you start to talk that you start to get a wee bit of sense.”
Adams pointed to his own struggles as examples of the need for tolerance and respect for others to achieve peace.
“I’ve discovered that hatred […] is very corrosive,” he said. “While I hate injustice, and while I hate poverty and I hate imperialism, colonialism and any inequality, I discovered long ago to give away any sense of hatred for those who shot me, any sense of hatred for those who beat me, any sense of hatred for those who imprisoned me.”
The discussion also addressed the definition of peace and how to recognize when conflict resolution is working. Adams stated that peace isn’t simply the absence of conflict, but the presence of justice and peoples’ rights. By this definition, the struggle in Ireland is far from over, Adams said.
He also called on the international community to take responsibility in peacekeeping, saying that assistance from third parties increases the possibility of success.
“If the international community doesn’t uphold the law, who does?” he asked. People from Western cultures, Adams said, tend to forget that the West doesn’t make up the whole world. He stated that it’s the duty of the West as a privileged world power to assist other countries who are in less fortunate positions.
On an individual level, Adams also encouraged people, especially students, to do their part in the global community.
“I know it’s a bit of a cliché, but I do think that one person can make a difference in any situation,” he said. “A lot of people feel disempowered or so wrapped up in their own issues, but really you’d be surprised just how important it is to be conscious of your own power in any given situation.”
For many students, the discussion brought to light a civil struggle that they had previously not known much about.
“Normally when people think of continuing sectarian violence their immediate thought is Israel and Palestine, they don’t really look at this issue which has been going on […] for a significant amount of time,” said Dan Donahoe, ’11. “I think it’s definitely going to make people more aware of these issues and what’s being done.”
McAuley said that he often sees students who have attended similar discussions with Adams traveling to Ireland to learn about conflict resolution.
It was the opinion Adams and many of his representatives that the interest of Americans in Irish affairs and the support of the Irish-American community greatly helped peacemaking in Ireland.
“There is a very special connection,” O’Hare said. “People here just really supported the peace process, supported Sinn Fein’s place in it and really shared with us the desire to see Ireland renewed and totally independent, the boarder gone, the petition ended and a new Ireland for all the people that live there.”
McAuley agreed, saying that Irish political leaders have come to the U.S. for years to raise awareness and garner support.
“Irish-America and the United States have been hugely important over the last 40 years,” he said. “That engagement has been very strong, very powerful and very important.”
Delete Image
Align Left
Align Center
Align Right
Align Left
Align Center
Delete Heading