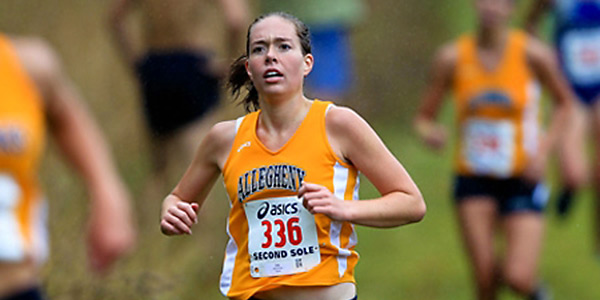 Although the coaches poll ranked Allegheny as No. 2, the near upset was a surprise.

After scoring over a minute and a half behind Oberlin at the Regional Rumble in mid-October, the Gators cut their time by over 30 seconds. The Gators’ total time was 1:13 behind the Yeowomen and their average was only 14 seconds off of the winning pace.

“We were projected to get second, but not that close,” said head coach Brent Wilkerson. “I think next year we’ll be a serious contender for the [conference] title.”

Wilkerson added that such a close finish to a team ranked 22nd in the nation presents the possibility of qualifying for the NCAA Championships this year.

The Gators grabbed two of the top four spots at conferences with Kelly Gallagher, ’13, finishing third with a time of 23:11.8 and Kristina Martin, ’14, gaining fourth place right behind Gallagher with 23:19.5.

Although cross-country seems like an individual sport, Allegheny’s top two finishers felt a sense of teamwork during the championship race.

“[Martin] was right behind me, and it was nice having her there during the race. We got to push each other,” said Gallagher, whose impressive finish earned her First Team All-Conference accolades.

During the regular season, the team considered the time difference between runners their greatest flaw, but the Gators felt they ran much more consistently at the conference championship.

“Our whole team stepped it up and we’re closing the gap between our first group of runners and our second group,” said Martin, who became the second runner in Allegheny women’s cross country history to earn the honor of being named NCAC Freshman of the Year last weekend.

“We did a really good job of that at conferences,” she said.

“Any one day, someone might have a bad race, but on Saturday, everyone had a good race,” Gallagher said. “Everything finally came together.”

The second-place finish is their best finish since 2007 when the Gators won the NCAC Championship.

Despite the narrow loss at conference championships last weekend, Wilkerson takes heart from their extremely strong showing. After running the challenging course at conferences, he insists the team should be confident facing the tough course coming up in two weeks at the NCAA Mid-East Regional Championships at Slippery Rock University. The Gators hope that a strong showing at regionals will translate into both a bid and an impressive performance at nationals.

“Us getting second to a nationally-ranked team by that close definitely tells our ladies that we’re good enough to compete in the national meet,” Wilkerson said.

The team needs a first or second-place finish at regionals in order to automatically qualify for the national meet. If they do not get an automatic bid, they will have to hope their perfomance was good enough to get them one of the 16 remaining at-large bids. With eight regions nationally, if the Gators can finish fourth or better at Slippery Rock, they have a good chance of making it to the final meet.

If they advance out of regionals, the Gators will compete in the NCAA Division III Championships, featuring the nation’s top 32 teams. Nov. 20 at Wartburg College in Iowa.