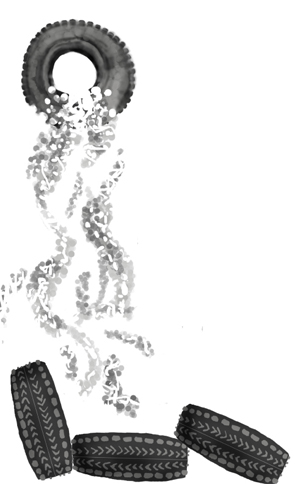 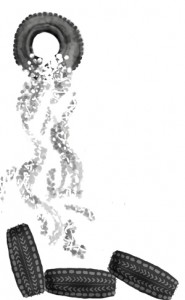 Crawford Renewable Energy’s proposed tires-to-energy plant was granted official building approval last Monday. Although the facility was a topic of debate for Allegheny students and locals alike in the last academic year, the approval ignited the first collective attention that the power plant has seen on campus since its initial proposal.

According to the Meadville Tribune, The Pennsylvania Department of Environmental Protection issued the build approval. The plant, located about 10 miles from campus, will not receive its necessary-for-operation air quality permit until after it is up and running, more than two years from now.

It will produce enough electricity to power as many as 75,000 homes and exceed an economic impact of $44 million annually.
Students for Environmental Action President Maranda Nemeth, ’12, said that she fears people aren’t fully aware of the potential impacts surrounding the tire-to-energy power plant.

“A lot of people are overlooking them [health risks],” she said. “I mean this is big, the emissions are extremely toxic and this is an important thing to be involved with.”

The CRE Web Site argues that its facility’s methods produce nothing like the black, pollutant cancerous incinerator smoke that people so commonly associate it with. It also claims to benefit the area by addressing the “waste tire problem”, which in itself poses “health and safety threats”.

According to the site, the entire plant is an enclosed system. Tires will be loaded directly into the building for preparation, and the technology utilizes the best emission control technology to prevent smells, soot, and smoke from escaping the plant.

Brian Anderson, ’13, is a member of SEA. He was also in an FS Environmental Science class last year that spent an entire semester compiling a 70-page report on the proposed tires-to-energy plant. He said that only three other purely tire-to-energy designed plants have existed in the United States.

“I know for certainty that 2 of the 3 past tire-to-energy facilities had enormous fines and complaints about air quality,” he said.
According to Anderson’s research, one of those plants was destroyed in a fire, and the only remaining plant was financially rescued after receiving government subsidies.

Economics professor Don Goldstein said that the lack of success of the other plants should raise economical concern for community members.

He said that people should be asking why there aren’t more plants like this in the US if they’re so financially and environmentally viable.

Anderson feels that the College hasn’t taken enough action beyond the open-panel discussion, which some argued was biased or ineffective.

“The College as an institution hasn’t fostered any conversation dealing with questionable sustainability or health impacts,” he said. “It just makes administration seem impartial in turn.”

The open-panel discussion further complicated the arguments between a community’s urgent need for job opportunities at the risk of negative environmental and health impacts.

Goldstein said that calculations like CRE’s projected financial figures and job opportunities are often inaccurate, an overestimate that doesn’t purposefully, but nonetheless does, oversimplify total impact.

Anderson felt that the $350 million could be better spent. He said that the College could have hosted a discussion or speaker that addressed alternative energy options, such as a wind turbine project on Erie’s coast.

Goldstein, who was at the open-panel discussion in February, agreed.

“An offshore wind farm in the Erie area would generate far more economic impact and jobs than a tires-to-energy plant could ever hope to do,” he said. “Good skilled high paying jobs doing something that has a long term future because its part of real fundamental solutions to our energy problem.”

Nemeth said that SEA has been looking for a way to support community members that are opposed to the plant’s construction. They were particularly interested in assisting the Crawford Area Residents for the Environment group which formed as a direct response to the facility’s proposal last year.

After receiving a letter from a representative at the Environmental Justice Network, SEA decided the tires-to-energy plant would be its new focus.

“Our goal is to partner up with this network and be involved in the community action and organizing in any way,” Nemeth said.
In a letter to Allegheny environmental leaders and President James Mullen, EJN asked that students and faculty rally with CARE to appeal the recently approved building plans.

“I think it’s going to turn out to be something that’s really amazing and I hope that we can really get involved and work like a team,” she said. “What exactly we’ll do I’m not quite sure, yet but I see us helping with letter writing, or holding community meetings, or anything they kind of need.”