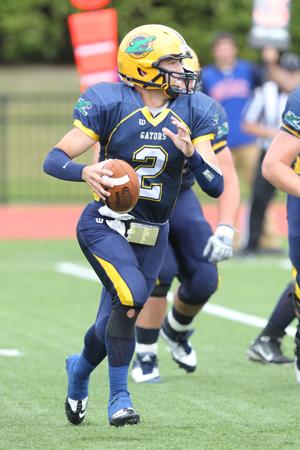 The Gators suffered their fourth loss of the season at the hands of the Wabash College Little Giants at home this weekend with a final score of 22-16.

The defeat by the nationally ranked Little Giants puts the Gators at 4-4 for the season. Wabash thwarted an attempt at a Gator comeback despite a forced fumble by Drew Perry at the Gators’ 38-yard line in the final five minutes of the game.

Doug Williams picked up the fumble, enabling quarterback Jordan Fowler, ’12, to lead a 48-yard, 11-play drive downfield that would have given the Gators the go-ahead score. The offense failed to capitalize on the opportunity, as Fowler’s pass to Matt Griffith, ’12, fell incomplete on fourth down.

Despite the loss, the Gators held advantages in several statistical categories. They gained 66 more yards than Wabash in total offense and held the advantage in time of possession.

The offense held the ball for 37 minutes which included a Fowler touchdown pass to fullback Dan Lubarda, ’14, and a field goal by kicker Ryan Zipf, ’12. The Gators led by three points until Wabash quarterback Chase Belton put the Giants up 14-10 going into the half with a three-yard keeper into the end zone.

Zipf added two more field goals in the second half, tying his career high by going three for three, but Zipf’s efforts would not be enough to earn the Gators a victory.

“If we punched the ball in instead of settling for field goals then we probably would have won,” said Fowler. “We just need to bring the same effort level against Hiram and we should be good to go.”

“We need to finish drives with touchdowns, not field goals and do a better job of plastering wide receivers when the quarterback scrambles,” said Matlak.

Shortly after Zipf’s third field goal of the day, junior cornerback Colin Hartford dropped what could have been the game-winning pick six for the Gators. Their efforts in the second half were not enough to overpower the nationally ranked Giants. While the team came up short Saturday, some strong freshman performances were a high point for the Gators.

Freshman Derrick Emigh set a personal record with five catches and rookie Raysean Glenn blocked a punt in the first half.

The Gators look to shift their focus to the Hiram Terriers.

Fowler believes that his team has the right mindset headed into their final two games of the season.

“We took it right to those guys and we didn’t back down from the challenge,” said Emigh.

Head coach Mark Matlak believes that his team played a quality game despite the loss.

“I do feel our guys played a great game,” said Matlak. “We were leading the number nine team in the country and just fell short. We expect to win every game we play.”

Heading into the next game, the Gators will look to their quarterback to continue his impressive play.

Fowler threw for 240 yards with a completion rate of 73 percent as he continued his streak of crisp quarterback play which includes onsecutive NCAC player of the week nominations.

The loss against Wabash puts Allegheny’s overall record at 4-4, with a 3-2 record in-conference.

While they are eliminated from playoff contention, the Gators will continue to bring intensity to practice.

“We had a great week of practice coming out of the bye week,” said senior safety Ryan Scroth. “We had great focus. We need to keep playing the same way, stick to the game plan and stay consistent.”

The Gators will face the Hiram Terriers at 1 p.m. at home on Saturday.