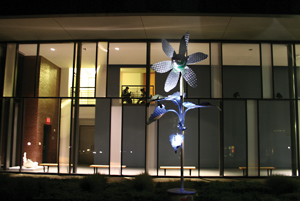 Artist and alumnus David Edwards, ’84 visited campus yesterday to present his environmental art sculpture, “Power Flower,” as part of the Faculty and Alumni Art Exhibit. Courtesy of allegheny.edu.On Oct. 4, a 12-foot-tall metal flower appeared in front of the Vukovich Center for Communication Arts. The artist behind the structure was alumnus David Edwards.

Edwards graduated in 1984 with a degree in political science. He hadn’t been on campus for 20 years when he returned to present the structure “Power Flower,” his contribution to the Faculty and Alumni Art Exhibit.

The flower collects energy with its wind-turbine flower petals and solar-paneled leaves.

“The tag-line that’s really true is that it’s art you can plug into, not art you have to plug in,” Edwards said. “It’s a combination of art, science and environmental technologies all wrapped into one package.”
In a presentation to students and faculty on Thursday afternoon, Edwards explained the inspiration and mechanics behind “Power Flower.”

Kirsten Russel, ’14, attended the lecture as an environmental science major who enjoys art.

“The concept of combining [art and environmental science] really interests me,” said Russel. “I like the idea of combining solar and wind energy in a sculpture so people can plug in laptops or something while working under it.”

Though its original creative purpose was unclear, Edwards said the “Power Flower” has inevitably become a teaching tool.

“It’s a catalyst for conversation about how you and I can generate our own electricity close to where it’s used, a concept called ‘distributed energy generation,’” Edwards said.

Edwards touched on this aspect in a presentation to Professor Thomas Eatmon’s FS 101 class.

“David has found a way to combine renewable energy technology with environmental communication and education through pieces of art,” said Eatmon, assistant professor of environmental science. “It’s one thing to see a solar panel but it’s not as engaging as seeing that incorporated into art.”

Eatmon felt that Edwards’ portion on his background and education was particularly appropriate for the class.

“Being that it was a first semester freshman course, they were able to see that they are not trapped in the major they choose or the career they choose,” Eatmon said.

Though very interested and active in art during high school, Edwards said that apart from a few art history courses, he had no formal training during his undergrad. He attained a political science degree from Allegheny and continued to pursue his master’s degree in education at Duquesne Univeristy.

A construction worker by day and a student by night, Edwards said he dropped out of graduate school to start his own construction company. Twenty years later he had sold the company and fully immersed himself in art.

He said the “Power Flower” idea was a result of interest in wind and solar power, though he realized he couldn’t create the product on his own.

In 2008, he founded the Art Energy Design company, a team of five individual artists and technologists. One year later in 2009, they produced the first working prototype.

The uses of “Power Flower” range from wind and solar self powered DC circuits that can power laptops, phones and LED lighting, such as the mobile piece on campus. Other protoypes feature a water pump for gardening.

The flowers have been featured in more than 50 art and environmental events.

They were also recognized in the 2009 G20 Summit in Pittsburgh.

Though Edwards had not been back to Allegheny since for over two decades, potential plans are in the works to bring him back again.

Over the summer, art professor Amara Geffen was approached by Physical Plant director Cliff Willis to design a project for the North Village quad. According to Geffen, the initiative is in preliminary stages and that Willis was originally interested in her community Sign Art for the space, but they’re also considering a collaborative effort with Edwards.

“Bringing him into contact with our students, collaborating either through part of a class or through some special class, one credit with a visiting person, could be really cool,” Geffen said.

Edwards projected that the cost for such a piece would be roughly $10,000.

“I’d like to finally find a home for it [“Power Flower”], but I would be very interested in collaborating with Allegheny College, even if it’s in a whole different design,” he said.