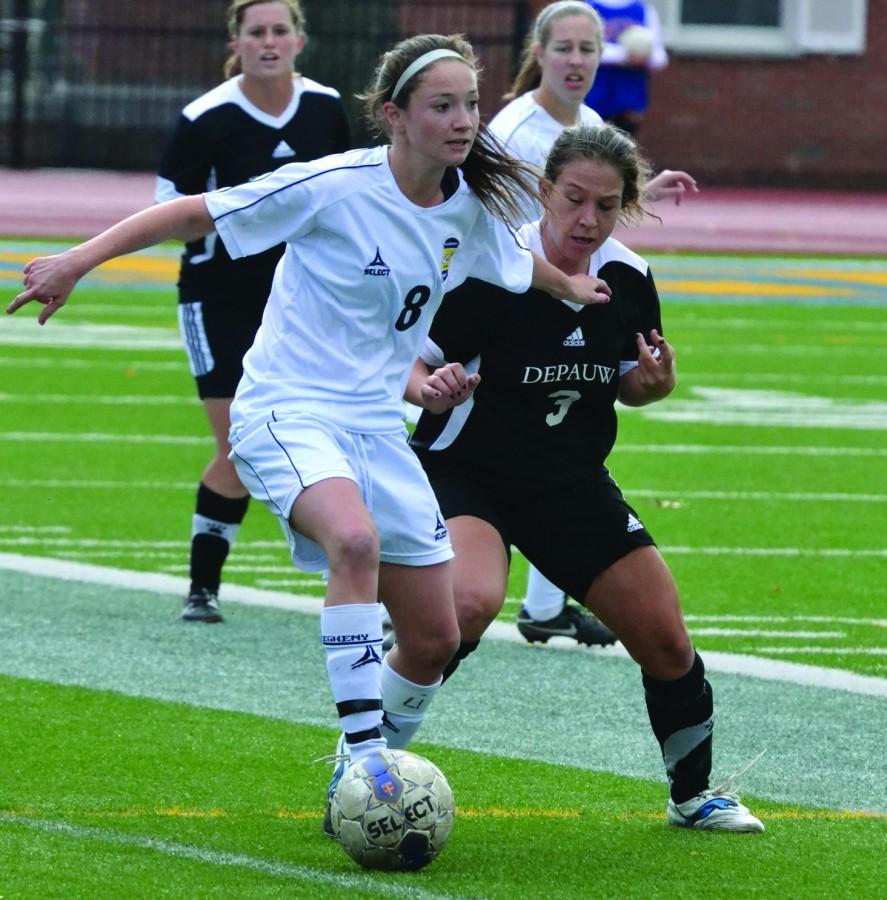 BY KELLY GALLAGHER
Staff Writer
[email protected]
The women’s soccer team managed to hold on to their spot atop the NCAC with victories over Oberlin and DePauw and a tie against Kenyon in their last three matchups.

This gurantees them a first or second place finish heading into the conference playoffs.

In their matchup against Oberlin last Wednesday, the Gators dominated the Yeowomen with a final score of 4-0. Playing on a flooded field, the squad dominated despite the rain and the mud to capture their ninth victory of the season.

“We adapted to the weather and played our game,” said senior Alex Gordon.

Captain Emily Karr, ’12, was named NCAC player of the week. Karr kept the Yeowomen scoreless even after the defense allowed a season-high nine shots on goal. She currently holds the fourth highest shutout total in NCAA Division III history at 42.

Michelle Holcomb, ’14, aided the Gators efforts with two goals on the night, one of which came just over six minutes into the match.

The squad continued their success versus DePauw on Saturday. Junior Ashley Lehr scored the only goal of the night Her goal came early in the second minute and sustained the Gators for the remainder of the match, giving them their tenth victory of the season.

“Katrina Gazsi has been exceptional all year,” said coach Michael Webber. “She and Sam Hoderlein have played every minute of every match and have put a lot of pressure on our opponents during each game.”

Looking ahead, the Gators are preparing for their match against Ohio Wesleyan.

“Something we have been working on all season is consistency,” said Schirmeister. “We need to translate all of the little stuff the girls are doing right into a solid 90 minutes of play.”

The team also hopes that the bye week will help them be ready for the remainder of the season.

“We struggled last year with holding onto our fitness at the end, so we really focused on that this year,” said Gordon.

The Gators will face Ohio Wesleyan University on Saturday.

Players hope to continue their winning ways headed into the playoffs.

“We see this as our last step to make or break us,” said Karr. “We have been doing everything right and are in a good position.”