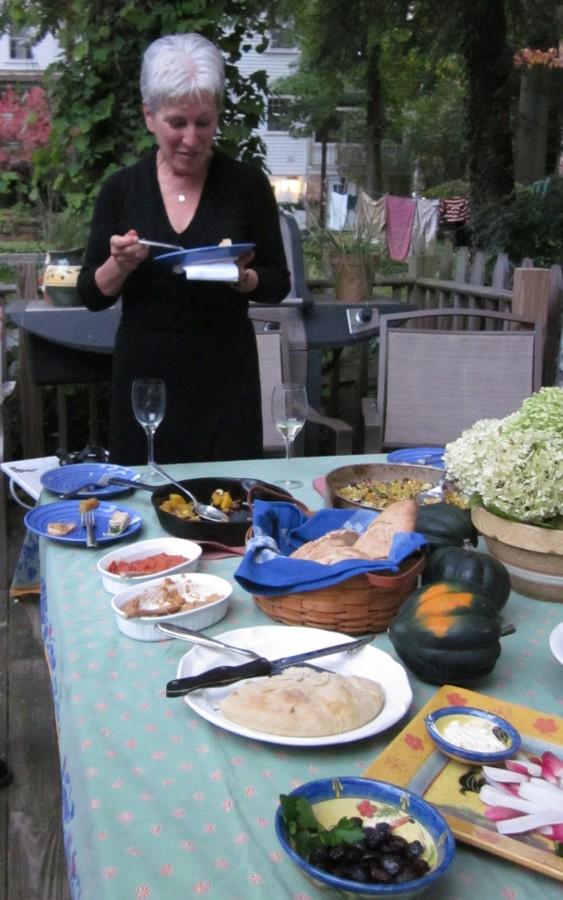 Instead of cooking dinner for my friends this week, I was invited to a dinner party with Mollie Katzen, one of the best-selling cookbook authors of all time, according to The New York Times.

Katzen visited Allegheny to give two separate presentations Tuesday. She squeezed in a quick dinner between them.

Christopher Bakken, associate professor of English and creative writing, hosted the group at his house for a table full of seasonal dishes.

Bakken is currently writing a nonfiction book entitled Honey, Olives, Octopus: Adventures at the Greek Table following the craft of cuisine in Greece.

For the occasion, he cooked chestnut squash with caramelized ginger and fresh corn succotash, finishing them under the wooden stove in his backyard. He served olives from Greece, radishes with salted butter, potato salad, tomato marmalade and chicken liver with sourdough bread, made with sourdough he also brought back from Greece. He also baked a spinach pie.

“I’m happy,” Katzen said, looking across the table in front of her. “Mouth-happy.”

I had never eaten anything on that table before. It was almost daunting until I remembered that Bakken is quite the chef. He appeared on The Early Show on CBS in 2001 as the Chef On A Shoestring winner, for which he had to budget for a meal under $40. His recipes have appeared in Food & Wine magazine.

I chickened out of the chicken liver, but I tried and enjoyed everything else. If I had to choose favorites, I’d be torn between the sourdough bread with tomato marmalade and the chestnut squash. 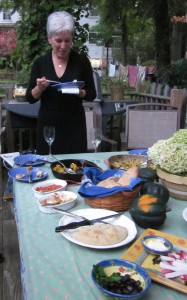 Mollie Katzen was pleased with the meal, commenting she was “mouth happy.” Photo Courtesy of ELAINA MERCATORIS.We sat on Bakken’s back porch on an October day with almost 70-degree weather discussing Greece, politics, family and the oboe, which Katzen plays. This multi-talented woman said her four gardens occupy much of her attention, but she also hopes to get back to painting after her final book.

She joked about her light gray hair and her mood was even lighter.

With Katzen’s focus on campus being healthy eating, it was likely we dinner guests would see sustainable foods presented on the table. Almost every dish involved a fresh vegetable. Bakken also organized the Meadville Community Supported Agriculture program with a local Amish farmer ten years ago and continues to run it out of his garage.

Bakken got acquainted with Katzen’s cookbooks, the Moosewood Cookbook and The Enchanted Broccoli Forest, in college, while living with vegetarians.

He gave me his recipe for the delectable chestnut squash he served so I could share the seasonal goodness with you. Don’t be afraid to try something new; it may turn out to be your new favorite food.

Use a knife to split the squash in half, then scrape out the seeds and pith with a spoon. Peel all the tough skin off the squash with a carrot peeler, then chop the flesh of the squash into one inch pieces.

Toss the squash pieces in a bowl with a generous gurgle of olive oil and a pinch of sea salt and pepper. Arrange in a single layer on a baking sheet and bake for twenty minutes, or just until one side of the squash begins to brown. Set aside to cool.

Meanwhile, heat a skillet with a few drops of olive oil and toast the walnut pieces, tossing frequently. Season the nuts with a pinch of salt and remove from heat.

Arrange cooked squash in the bottom of a lightly oiled baking dish or pan. Top with the toasted walnuts and sprinkle with the candied ginger.

Return to a 400-degree oven for 10 minutes, just to heat all the ingredients together. Serve immediately.