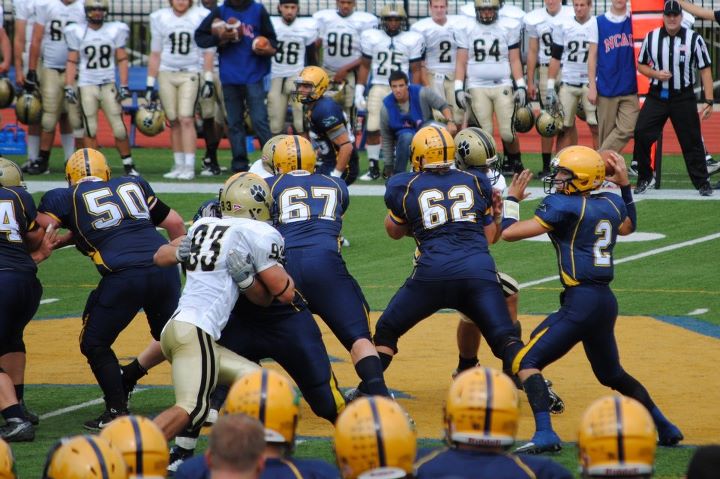 The Gators suffered a loss to Case Western after a devastating fumble that resulted in a Spartan touchdown that sealed their 17-10 victory in the closing minutes of the game.

“The defense had just come off the field after stopping Case Western on fourth down,” said senior linebacker Doug Williams. “We were all excited and thought we had won the game. Then we fumbled and I could just tell by the look on my fellow teammates faces and the way I felt. We were sick to our stomachs.”

After a solid first half defensively, allowing only nine points in the first three quarters of play, the Gator defense thwarted a Case fourth-down attempt, leaving the Gator offense deep in their own territory with 1:21 left on the clock.

Head coach Mark Matlak urged his team to get back on the field and do their best to recover.

“I was thinking about where they had the ball and getting the defense back on the field,” said Matlak. “We used two timeouts to preserve some time so that our offense had some time left on the clock so they had an opportunity to score. It worked out so that we had a Hail Mary pass with five seconds left to give ourselves a chance to tie the game.”

Quarterback Jordan Fowler originally thought that Tamburlin was down, but the call stood. After a final failed Hail Mary pass attempt, the Gators were left to cope with what would be their third loss of the year, tying their total losses for all of last season.

“My initial thought whenever the ball was fumbled was Brian may have possibly been down, but I did not hear a whistle,” Fowler said. “I had mixed emotions after the game. I felt absolutely horrible for our defense because they played their hearts out and did not deserve to lose.”

On the defensive end, the Gators stopped five of seven fourth-down attempts by the Spartans. They also broke up six passes and recorded five sacks. Senior cornerback Travis Wilkins picked off a pass that helped the offense to score their only touchdown of the game, with fullback Tim Werley, ’13, taking it in from the one.

“Our performance on defense was outstanding,” Williams said. “The effort level and the will to never give up were there. There were several times throughout the game that Case was driving on us and it came down to fourth down. I’m very proud of the defensive unit.”

“The defense gave our football team a chance to win the game,” Matlak said. “They gave outstanding effort under adverse situations.” Fowler was disappointed with the offensive production. The Gator offense finished the game with a total of 150 yards, and earned eight first downs to Case’s 19.

“Offensively we did not even deserve to be in the game at all with our performance,” said Fowler. “But as a competitor you always hate to lose, so it definitely still hurt. Our performance on offense honestly was just sad.”

The offense did succeed in producing one scoring drive which ended with a field goal by kicker Ryan Zipf, ’12, that

would give the Gators a 10-9 lead. The drive was sparked by a 46-yard Fowler pass to senior tight end Max Kauert that put the Gator offense at the Spartan one yard line.

“The problem with the offense during the Case game was our inability to block,” Matlak said. “If our blocking improves then our offense will improve.”

Fowler stressed the need for improvement on the offensive end.

“I have been trying to think of why exactly we played so badly on offense, and the only answer I can come up with was that we clearly were not prepared as well as Case Western was prepared,” Fowler said. “Everyone has to be accountable and prepare better this week in order for us to improve.”

The Gators hope to rebound from their two-game losing streak this Saturday against Kenyon on the road at 1 p.m.