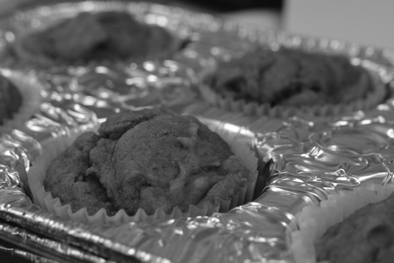 It’s that time of year again, when the weather turns, the leaves change, people carve pumpkins and I buy candy corn. Fall has officially arrived, and this means I’m already obsessed with pumpkin-flavored everything.

My mom makes an easy, delicious pumpkin bread, so I asked her for the recipe. Muffins are much simpler and quicker to eat, so I decided to attempt the bread recipe in muffin tins.

Go to the store and buy a can of pumpkin now. Granted, when I went to Tops for it two weeks ago, they didn’t have any yet. Buy a 3-lb. can so you can make pumpkin muffins, pumpkin cookies, and pumpkin bread. Insert raisins or chocolate chips for a twist.

Don’t be like me and forget you need a can opener for this recipe!

If you don’t own muffin trays, buy disposable aluminum baking pans but don’t dispose of them. I use paper cup liners for muffins and just wash my bread pans and reuse them.

Combine 1 cup of sugar and ½ cup of oil in a fairly large bowl. Add the two eggs, one at a time, beating after each. Add 1 cup of pumpkin and mix well.

Add the dry bowl to pumpkin mix, stirring just until combined, careful not to over mix.

Spoon batter into muffin pans, and bake in oven for 45 minutes so the kitchen and surrounding area smell as lovely as fall itself.

The original bread recipe bakes for an hour in the same temperature, but because I used muffins, I began checking them at a half hour.

I took them out after 45 minutes, partly because I like my baked goods moist and partly in fear of drying them out.

But they turned out to be the perfect consistency for me.

They could take a little longer than 45 minutes though, pending your consistency preferences.

Test them by sticking a toothpick or fork down the middle of one. If it comes out clean, they’re done!

My batch made 15 muffins, so share the goods with your friends as soon as they’re out of the oven.

Save a few for later to eat for breakfast or a midnight snack.

If you’re not feeling fall yet, get in the mood with Franklin’s Apple Fest this weekend or Conneaut Lake’s Fall Pumpkin Fest Oct. 14-16.