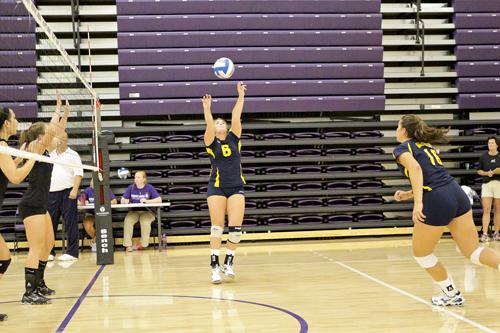 Sophomore Maddie Hudac and the women’s volleyball team hope to recover after losing all four matchups in straight sets at the first NCAC Power Weekend of the season. ALLEGHENY SPORTS INFORMATION

After a 0-4 showing in the NCAC Power Weekend tournament, the volleyball looks to move forward and capitalize on earlier success.
“We were hoping to get a couple of conference wins but we are still learning the game and will be pushing to add more to the offense this week,” head coach Bridget Sheehan said.
Offense was a problem for the Gators over the weekend, falling in straight sets in all four matches to Denison, DePauw, Wittenberg and Kenyon.
The Gators were competitive with the nationally-ranked Tigers, falling in the first set 16-25. Wittenberg proved strong in the next two sets, overpowering Allegheny on the offensive end (7-25, 8-25).
The squad played what was their best showing of the weekend against host Kenyon in their final match. Their efforts, however, would prove fruitless, as they fell in straight sets yet again.
“It was hard to lose to Kenyon,” senior Winnie Wong said. “We knew we could have beat them but we just weren’t clicking together.”
“I truly believe that Gator volleyball is going to bounce back,” said Wong. “We have worked hard in practice and our communication is increasing.”
Looking ahead, the squad will face conference foe Ohio Wesleyan and then battle Denison on Saturday.
“We’re fired up to come back strong against Denison,” said sophomore Maddie Hudac.
Only at the halfway point of their season, the Gators still have time to turn it around.
Coach Sheehan is certain of what her team needs to do to improve their play before their next Power Weekend at Wooster.
“The team is very excited to turn things around and work hard to get where they need to be as productive players on the court,” Sheehan said.
In the meantime, Sheehan continues to stress hard work and dedication.
“Our team biggest strength is that they want to do well and they are willing to work hard at the process that will get them there,” Sheehan said.
Wong believes that the opportunity is not far ahead.
“This weekend look out because we are coming back with two wins against OWU and Denison. We have the talent and the enthusiasm and we are building our team chemistry as we go.”
The Gators will travel to Ohio over homecoming weekend to play conference rivals  Ohio Wesleyan University on Friday night and  will face off against Denison on Saturday at 1 p.m.