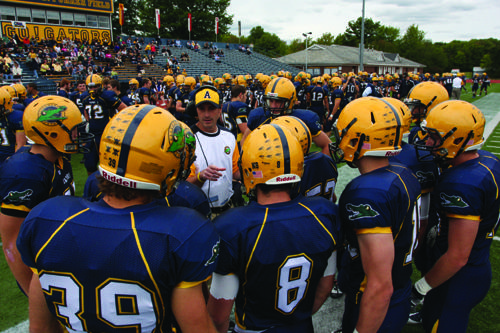 The football team looks to come back strong at home after a week in which the defense surrendered 444 yards and the offense failed to capitalize on scoring opportunities. ALLEGHENY SPORTS INFORMATION

What began as a 3-0 lead ended as a 38-3 loss for the football team this past weekend, with the defense surrendering 444 yards to the nationally-ranked Wittenberg Tigers.
The defense allowed Wittenberg to make big plays on offense. Junior cornerback Colin Hartford stressed the importance of preventing those big plays in their next matchup.
“The keys are definitely for people to do their own assignments and do their 1/11 on defense,” said Hartford.
“We know what we have to do, it’s a matter of executing it the way we can.”
The defense gave up three big plays, highlighted by an 80-yard touchdown reception by Wittenberg wide receiver Josh McKee, ’14. The loss  leaves the Gators with an overall record of 2-2 and 0-1 in conference play.
The defense was not all to blame. While the offense managed 300 yards of total offense and 16 first downs, the Gators failed to complete drives.
Coach Matlak believes that this must change in order for the Gators to win consistently.
“We are a slow and methodical offense,” said Matlak. “We won’t get too many big plays, so when we get a chance we need to finish drives.”
Quarterback Jordan Fowler echoed these sentiments.
“We did everything we pretty much wanted to do against Wittenberg,” said Fowler. “We just didn’t convert our chances to points, which is something we need to do this week.”
Fowler also cited mental errors as a source of the offensive problems.
“If we can eliminate our own mental errors and just play good, smart football then I believe we will get a win,” Fowler said.
The Gators hope to resolve some of these issues before battling Case Western at the homecoming game this weekend. The Spartans are off to a 2-1 start and are coming off a 24-6 road victory against Denison.
Matlak stressed the importance of focusing on the opponent, rather than the team itself.
Last season’s matchup showcased the Spartans’ fast-moving, up-tempo offense.
“Last year they were very fast getting to the ball and snapping it with lots of time on the play clock and we struggled to adjust in the first half,” said Hartford. “If we can match their tempo and counter it effectively and create our own pace we can be very successful on defense.”
The Gators nationally broadcasted game will kick off at 1 p.m. Saturday and will be televised on Fox College Sports.