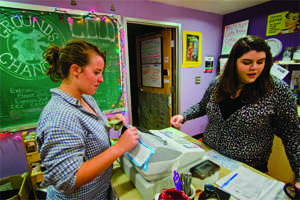 Grounds for Change volunteer Ashley O’Donnell, ’12 serves Alivia Haibach, ’13 on Thursday night. Members of the the GFC board are working with Parkhurst to take steps toward designating Allegheny a “fair trade college.” Although many of GFC’s products are Certified Fair Trade, it is not yet considered a fair trade institution. CODY MILLER/THE CAMPUS

A group of students began an individual campaign this year for Allegheny to become a certified fair trade college.
“It is an independent project, not run by GFC but by students,” said Alexis Nielson, ‘14, an Allegheny representative at a recent Fair Trade Universities seminar.  “It’s not a club, but a movement.”
Students are now in the process of forming a committee and have plans for meetings, tabling events, and film showings to get the message out.
Grounds for Change currently sells some fair trade products, like tea and coffee, but is not yet a fully fledged fair trade institution. Fair trade coffee is also served in Brooks and McKinley’s dining halls.
The global focus on fair trade is on coffee and chocolate because those two products are not heavily grown in the United States.
Fairly traded coffee differs slightly from other fair trade items because the coffee program places a larger emphasis on better overall living conditions for workers as well as the environmental factors surrounding coffee production, such as pesticides elimination, water run-off issues and sustainability. The program also assists workers with putting their children through school.
“Fair trade is paying attention to the people on the other side of our consumer society – the producers – and making sure they are getting a fair wage to avoid exploitation,” Nielson said. “Being pro-fair trade is about being a global-minded community, focusing on the social and economic aspects of the issue.”
Michael Zanie, general manager of Parkhurst Dining at Allegheny, said that the Parkhurst corporation sent its own employees to the coffee fields where they purchase their goods. These employees oversaw the actual process and ensured that conditions were fair.
“Using fairly traded coffee is already a set standard in our company, and it is not a difficult thing to do,” Zanie said.
One concern about fair trade is price. However, when looking at the numbers, the difference is not substantial, especially when thinking about the cost-benefit ratio, said Ian Colley, GFC board member and activist for the Allegheny fair trade movement.
“There is only about a 1 percent, or 13 cents increase in cost,” Colley said.
Colley said this increase is a small price to pay in light of all of the positive aspects that come from purchasing fair trade.
“What hooked me onto fair trade was the social justice aspect of the entire process,” Nielson said. Fair trade works to get people out of poverty and improve their communities.
“We want people to know this isn’t just a fad; we want to keep this going after we graduate,” Nielson said. “This is an opportunity to make a difference, and we want to provide that option.”