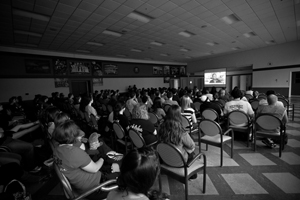 Over 200 students attended the Invisible Children Organization’s screenings of in Schultz Tuesday. The club showed “Tony” and “The Rescue,” both of which portray reality of the civil war in Africa. CODY MILLER/THE CAMPUS

In Schultz Banquet Hall Tuesday night, members of the Allegheny community flocked to watch a viewing hosted by new campus club, Invisible Children Organization.
The video documented the experience of three young men, whose trip to Africa inspired them to create a film exposing the harsh reality of the war, in which Joseph Coney has employed child soldiers, removing them from their homes and forcing them into violence.
Several guest speakers followed up the documentary many students attended, particularly members of Greek life.
The club’s founder, Melissa Robertson, ’14, started the group after several failed efforts to bring Invisible Children to campus through ASG.
The videos and stories inspired her and Vice President Leigh Charland, ’13, to request permission for an Invisible Children group at last year’s final ASG meeting.
After receiving approval from ASG, Robertson believed her job would be easy, but that assumption changed with one phone call.
Invisible Children expected her to hold a screening and with only one available date, so Robertson had to act fast.
She booked the screening for Sept. 20, and worked to get the word out to various student organizations, particularly Greek life. Originally apprehensive about the attendance, Robertson was thrilled with the turnout, as were the speakers who came to the event.
“I was relieved and happy to see everything come together,” said Robertson.
“I’ve been stressing out. They requested 200 people. How was I going to do this?”
With the help of Greek life and other students around campus, Robertson and her organization reached their goal of 200.
“One of the roadies came up to me and asked me, ‘How did you do this?’” Robertson said. “Usually for a school our size, they only get about 17 people.”
Robertson credits Allegheny students for the success of the event.
“Allegheny students are passionate about things they get interested in,” Robertson said.
“They’re curious and starving for knowledge. A lot of people have seen this event before, but they came back to it and that says a lot.”
One student, Dee Carlgren,  ‘12, explained how she was affected by Tuesday’s screening.
“The video was so compelling and to be able to hear from someone that grew up in this war truly touched my heart,” said Carlgren.
The club has several events lined up for the remainder of the year in its aim to promote awareness of the current civil war in Uganda.
In their “Displace Me” event, they will ask students to spend a day living in a box, similar to the experience of those displaced children in Uganda. Robertson also plans to hold a book drive in the near future.
Currently the group is made up of 18 people. One member, Kate Cragg, ’13, attributes the club’s success to the documentaries and their inspirational effect on students like group founders Robertson and Charland.
“I know that the group was started and has managed to recruit as many people as it has because of the way the film last year affected students,” said Cragg.
“It made students, like Melissa and Leigh, want to become more proactive about the atrocities taking place against children in places like Uganda.
They were very moved by the stories they witnessed and started the group to do anything they could to help.”
The Invisible Children Organization holds their meetings Thursdays at 8 p.m. in McKinley’s Private Dining room.
Robertson urges anyone who is interested to contact her through email at [email protected]
More information on the national organization can be found at invisblechildren.com.