Dahlkemper versus Kelly: House of Representatives 3rd district candidates face off in debate 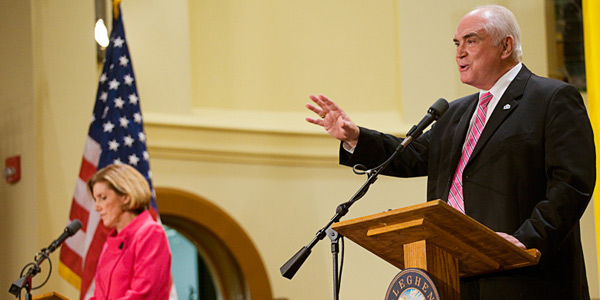 With only four days to go in one of the most highly-contested congressional races in the nation, congressional incumbent Kathy Dahlkemper (D) met challenger Mike Kelly to debate the issues at Ford Chapel on Thursday night. The debate paralleled the trajectory of the race in Pennsylvania’s third district: passionately partisan and too close to call.

The passion was palpable in the packed and stuffy chapel, with mostly Meadville community members dotting the pews and Allegheny students and faculty peppered throughout. As the candidates took the stage, the steady buzz of the audience grew to roaring applause that was difficult for moderator and Political Science Professor Dan Shea to suppress.

Although Kelly holds a seven-point lead over Dahlkemper in the most recent poll, the Democrat from Erie has been closing that lead, down from 18 percent in early Oct. The closeness of the race created a contentious atmosphere throughout the night.

The debate was focused around the candidates’ different views of government, with Dahlkemper touting her accomplishments during her term in Congress and Kelly pledging to rein in a government that has grown too large under the Obama administration.

In contrast, Dahlkemper offered a vision of government along traditionally Democratic lines, as a nurturing body for growing industries and impoverished Americans.

“The role of government is to help the poorest among us,” she said, adding that one of government’s most important tasks is to provide for the defense of America.

Questions ranged from what to do about the growing national debt to the passage of the highly contentious stimulus bill, which passed with only three Republican votes in the Senate and none in the House.

Dahlkemper touted a bill passed in September offering small businesses tax breaks and loans as part of the government’s current stimulus measures, and later went on to clarify that she supports the original stimulus bill passed in January of 2008 as a “game-changer.”

“Did it do everything we wanted it to do? No. But we’ve reinvested in the future,” she said, noting the expansion of broadband internet in Pennsylvania resulting from the stimulus and emphasizing investments in green energy, infrastructure, and high-speed rail. She also claimed that Kelly had been hypocritical in denouncing the bill, as during his time as chairman of the Butler County board, he requested stimulus funds.

Kelly called the bill a “disaster,” reprimanding Dahlkemper for rushing the bill through and proposing instead that the government lower the corporate tax rate, saying that government overregulation is holding small businesses back from growth.

“This is the kind of stuff that’s dangerous, Mrs. Dahlkemper, and when you start believing your party, and not your people, this is the result,” he said.

Though they were forbidden to do so, both candidates continued to direct statements at their opponent throughout the night, often followed by applause from the audience. On health care reform, Kelly expressed disappointment that Dahlkemper, the self-proclaimed “best friend of the unborn” in Congress, had failed to insert anti-abortion legislation into the bill; Dahlkemper chastised him for flip-flopping on the issue of disclosures of outside campaign financing.

Shea saw the back-and-forth as potentially harmful to Kelly’s prospects in the race, noting that some voters might see his remarks as condescending because he is a man.

“There’s still unfortunately some gender issues,” he said. “When male candidates turn to women and are too tough, it can backfire”

The national debt proved to be a contentious issue, with Kelly responding to a question of what specifically he would do to cut the national debt by referencing his business expertise.

“Absolutely there’s stuff that needs to be cut. What is it right now? I can’t tell you,” he said. “But I can tell you this: I’m always amazed that people take this attitude that you can’t expect the government to work the way business does.”

Dahlkemper continued to reference her record in office, mentioning legislation she passed closing tax loopholes that allow companies to go overseas and arguing for the creation of a Sunset Commission to evaluate the necessity of governmental departments and agencies and the extension of pay-go provisions that require Congress to fully fund all legislative measures they pass.

America’s economic relationship with China, an issue that had more significance locally than nationally, became one of the centerpieces of the debate.

“The focus here has been on the manufacturing base within the district,” Keith Gushard, reporter for the Meadville Tribune and one of the moderators of the debate, explained. “These companies are dependent on getting business, and some of the large companies are shipping it overseas [to China] because they can get it made cheaper.”

The focus on China offered Dahlkemper the chance to mention her position on the House Committee on Science and Technology, as she referenced a provision she created to open a market in the U.S. for rare Earth minerals, a product which she claims is controlled by China and may hurt our competition with them in the future.  Dahlkemper referenced this committee twice more and the rare Earth minerals provision once more throughout the night.  She also highlighted her vote for a measure to stop Chinese currency manipulations.

“I think we’re being a little bit hypocritical to say that we’re gonna penalize China because of our inability to see what’s going on in the world,” Kelly later added.

A question on bipartisanship in Congress brought the audience to their most passionate response of the night.

Dahlkemper proclaimed that she had been named the eighth most moderate member of Congress and mentioned her pro-life and pro-gun positions, as well as her refusal to vote for cap-and-trade legislation, as evidence of her ability to break ranks with her party.  Kelly said that Republicans had not been invited to the debate for most issues in Congress, and that he couldn’t presume to yet know where he would break ranks with his party.  But he did challenge Dahlkemper’s assertion that she was moderate.

“Now you may have grown up in Northwestern Pa., but you’re voting like you’re from San Francisco,” he said, eliciting first laughs, then boos from the audience as supporters of the two candidates fought for prominence in the packed chapel.

In both of their closing statements, Kelly and Dahlkemper underscored their faith and their community involvement.

“I’ve got to rely on getting through these things with the help of God,” Kelly said. “I really do believe that in this country, that is based on the Christian principles that we have been based on, that the answer is truly right there; it’s not that hard to see.”

Dahlkemper referenced her time as a Girl Scout, saying she always tries to “leave a place better than you found it,” and called herself a person who’s “filled with compassion.”

The next five days are sure to ratchet up the competition in a race that is garnering increasing national attention for its closeness.  Both candidates must now work to get their supporters out to the polls in hopes that they’ll be heading to Washington in January.