Allegheny, Meadville come together to remember 9/11 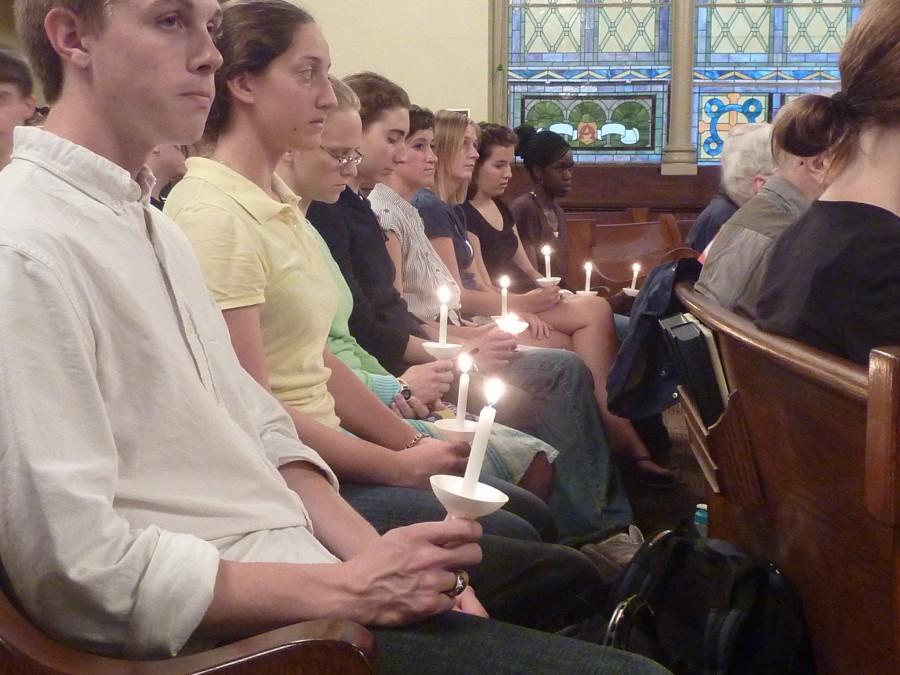 Students burn candles in Ford Chapel in memory of the lives lost on Sept. 11, 2001. PHOTO COURTESY OF HENRYK BRODER

A candlelight procession of students and community members marched up North Main Street on Sunday evening as part of the Sept. 11 memorial service that began downtown and ended in Ford Memorial Chapel.
About 50 people gathered in the gazebo in Diamond Park for a time of reflection and prayer before making their way to a candlelight service at the chapel, where more students, faculty and community members awaited.
Kazi Joshua, Assistant Dean of Students for Residence Life, was among the speakers. He shared his own memory of 9/11 and the event’s significance today.
“Let us remember that there was a 9/10, 9/11, and there was a 9/12,” he said. “The question is not just what happened on 9/11, but what happened on 9/12 going forward, and in what ways, if you share any kind of faith, are you being transformed.”
Timothy Solomon, reverend of Emmanuel Church of Christ, spoke alongside Joshua and lead the candlelight procession thereafter alone with Joel DiAngi, President of the Meadville Area Ministerial Association.
College Chaplain Jane Ellen Nickell said that she began organizing the event with MAMA last fall as an interfaith service that involved both the campus and community.

“We’ve done enough sort of lamenting and name reading,” she said. “It was more about moving on, how do we build those bridges that keep this from happening again.”
The service featured a variety of religious faiths. Dr. Solomon read a scripture from the Quran in the gazebo and the candlelight chapel service featured both a Jewish and Catholic song.
Kyle Kruse, ’13, said he particularly enjoyed the non-denominational aspect of the event.
“It goes to show that even though we are an eclectic group of people, we still unite under the same principles,” he said.
Rachael Jander, ’14 said that for her, Joshua’s speech was especially meaningful.
“To recognize a loss is one thing but to move forward with love and compassion in treating our fellow humans is a completely different one and I really appreciated that focus in both services,” she said.