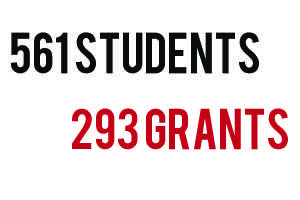 Over 50 percent of the freshman class received the Bicentennial Scholarship, a need- and merit-based yearly scholarship totaling $2,015.
Funded by alumni and the college, the selection process for the award paralleled the Trustee Scholarship.
Similarly, the recipients had shown strong academic merit and financial need.
“To have cut in stone criteria is just not the way Allegheny does things,” said Sheryle Proper, director of financial aid and dean of enrollment.
Alex Neal, ’15, heard about the scholarship from another prospective student and called to inquire about it.
“I kind of wish it would have been more straightforward, more cut and dry. Like this is what you get, and this is not what you get,” said Neal.
Without an official application, most prospective students heard about the scholarship by word of mouth or through a letter announcement they received with the award.
The Office of Financial Aid realized they had the funding to create the scholarship after many students had already received their financial award letters from the college.
“We have all of this rich history and I know there is a committee working on different ways to celebrate and recognize and there aren’t a lot of creative things we can do in financial aid,” Proper said. “We thought this labeling of part of a student’s award could help focus on some of that rich history.”
When freshman Nikki Grayburn narrowed down her list of colleges, she called Allegheny and asked for a financial review.
“I told them that other schools are offering me more money and asked if they’d be willing to give me more,” said Grayburn.
Financial Aid called her back in less than a day and offered her a brand new award, the Bicentennial Scholarship.
Another student, Elliot Bartels, ’15, called asking the same question. He didn’t qualify for any federal student aid grants, but he was looking to lower Allegheny’s cost.
“They called back a day later and said they would have more money available to match the costs of other colleges,” said Bartels.
Some even thought the scholarship was given to all freshmen.
“I was under the impression that it was a scholarship for everyone in the class of 2015,” said recipient Larry Hailsham, ’15.
Shelby Overman, ’15, learned about the scholarship when she received the announcement letter in the mail.
“Some people said they called up the school to see if they could get more financial aid and that’s what they gave them,” said Overman. “I don’t know how I got it.”
Proper cited the poor economy as part of the need for increased scholarships and increased discount.
A school’s discount is a way to measure how much merit-based scholarships and need-based aid an institution gives to its students.
The Bicentennial Scholarship added to the discount, but it wasn’t the sole reason for the increase, Proper said.
“Our discount would have been higher anyway, because of the economy, because of the marketplace we are in, because of what other institutions are doing, because of other institutions’ discounts being higher than ours,” she said.
Sophomore Melissa Robertson didn’t think the process was fair.
“I know it’s tough to pay for school,” she said. “But I don’t qualify for financial aid so I have a lot of loans out there, and I could have really used that extra $2,015 too.”
Although freshmen received the Bicentennial Scholarship in addition to the annual Trustee Scholarships and the Allegheny Grant, pending their merit and financial need, Proper said upperclassmen in need would have received some other alternative.
Before the Trustee Scholarship was created, Financial Aid had multiples names for different amounts of scholarships, Proper recollected.
“Any time you change labeling, people jump to conclusions that are not necessarily accurate,” she said.
Financial Aid named the award to commemorate the class of 2015.
“We just felt that it was appropriate for this new class that will experience the bicentennial graduation … to be the first class to have the new type of award,” she said.
Upperclassmen did not receive this award because they had previously received their official fixed Trustee Scholarship.
“Whenever we have implemented new scholarship programs, we have never, to my knowledge, done anything retroactive,” Proper said. “So to do so would have been a change in how we’ve always done things at Allegheny.”
Katie Beck, ’14, admitted to being jealous that she didn’t have the same opportunity.
“I understand the idea of having tradition in our school but I also feel like it’s an unfair advantage to the freshman class since the class of 2014 didn’t get a $2,014 scholarship and so forth,” she said.
Proper said that although upperclassmen were not eligible for this specific award, they were not getting cheated.
“It’s not that this class is receiving a lot more money that upper-class students didn’t receive,” Proper said. “Upper-class students who had financial need or academic merit qualified for our endowment scholarships.”
Financial Aid did not deduct from upperclassmen scholarships to create the Bicentennial Scholarship either, she said.
Proper hoped to extend the scholarship to members after the bicentennial class, but that won’t be determined until further into the year.
“We may continue to award it in recognition of this institution’s history,” she said.