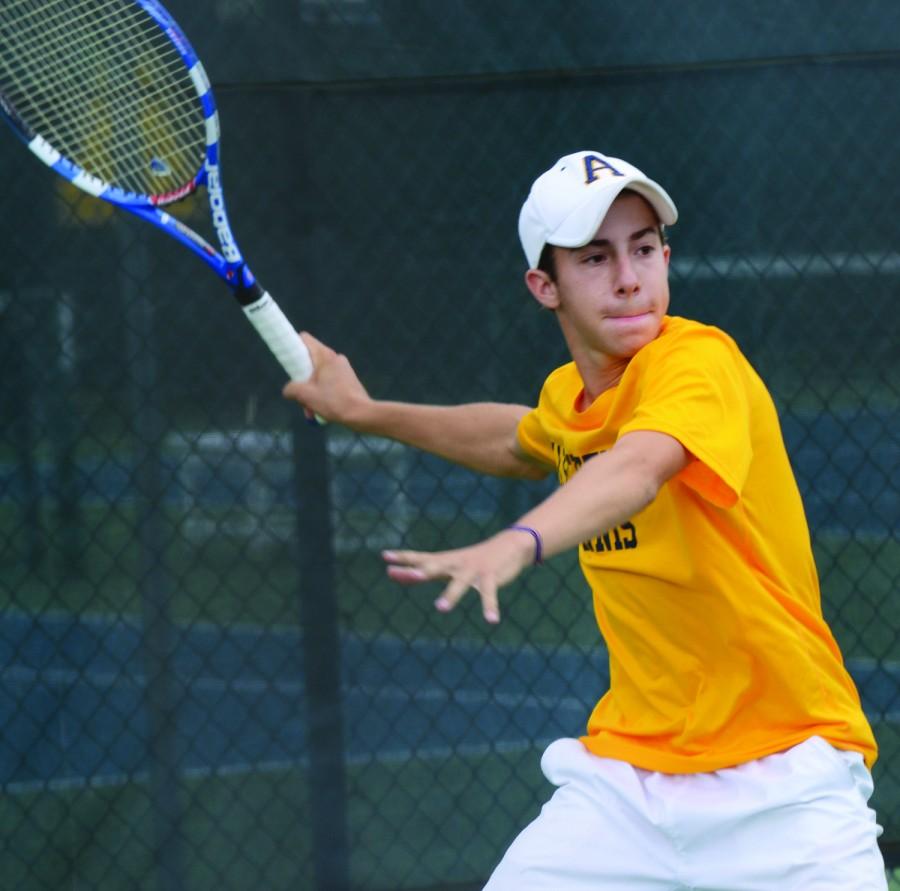 Patrick Cole, ‘14, worked his way to the No. 1 singles position on the team last season with an 18-4 record. CHARLIE MAGOVERN/THE CAMPUS

The Allegheny men’s tennis team returns two experienced singles players as they look to follow up a 12-6 season in 2010-2011.
Patrick Cole, ’14, will step into one of the top two singles spots after going 18-4 last year and earning NCAC Newcomer of the Year. Cole said this season is a chance for the team to show it has top-level ability.
“We definitely have the talent and depth to compete with the best teams in the conference. We just have to play the way we can,” said Cole.
The other slot will be filled by Mike Provenzano, ’13, who is co-captain alongside Cole. Five freshman joined the team and several of them are expected to make an immediate impact following the departure of Jake Allmaras and Nick Darrow.
New assistant coach Greg Kreitzer joined  the squad after former assistant coach Tim Riskie became the head coach at Hobart and William Smith Colleges.
Luteran noticed Kreitzer’s interest in the lives of the athletes on the team during the interview process and decided that quality would be useful to his team.
“I was very impressed by the questions he asked concerning our student athletes here, none of the other candidates did that,” said Luteran.
The changes continue as the NCAC welcomes the DePauw Tigers to the conference. The Tigers will join Kenyon and Denison as the three of the 10 teams in the conference  that will start the year in the national top 25 for Division III Tennis with another, Wabash, in the top 30. DePauw makes the NCAC one of the toughest tennis conferences in the nation, though the Gators will not face them unless they meet in the conference tournament.
Despite the high level of competition, the team aims to finish in the top three of the conference, which is a tough task considering they didn’t defeat Denison, Kenyon or Wabash last year on their way to a fourth-place finish.
Provenzano said that of those three teams, they have the best chance of taking down Denison, even though they lost to the Big Red 5-0 in the conference semifinals last year.
To be better prepared to make a stronger showing against the elite of the conference, many members of the team took part in tournaments sponsored by the Intercollegiate Tennis Association during the summer. They will get their first taste of action this fall starting tomorrow when they will host the Nancy J. Heath Invitational.
They will face Penn State Behrend first on Saturday and then will take on the winner of the Walsh/CMU match later in the day. The Gators will then host John Carroll on Sunday. Despite this quick turnaround, Luteran is excited for the challenge because it simulates what they will have to do to meet their season goals.
“We play three games in two days during our conference tournament so we might as well face the challenge now too,” Luteran said.