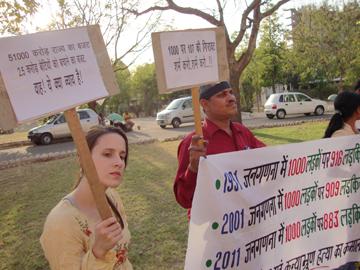 The streets were brimming with people and vehicles were lined bumper-to-bumper. The pollution was immediately noticeable, the atmosphere was exciting. Jill Koehler, ’12, had just arrived in India for her study abroad program.
Koehler, who studied in Jaipur, India this past spring, may have been in a foreign environment, but she willingly embraced the host country she grew to admire.
“I was intrigued by the women in their brightly colored saris, the countryside with its expansive mustard fields, the architecture embellished with jewels and intricate designs,” said Koehler.
Koehler studied through a University of Minnesota program in Jaipur, a smaller city in northern India. She described the city as being filled with a multitude of small shops—it seemed as though everyone owned a little tailor, soda or stationary shop.
Koehler first spent the first month and a half taking classes in Hindi, international development and country analysis. She then had an internship with the People’s Union for Civil Liberties, a human rights organization. Her boss, Kavita Srivastava was a passionate feminist much different from any other Indian women.
“She’s a strong woman,” Koehler said. “She quit her job to dedicate her life fighting for Indian rights and to fight against injustice of everyday people.”
For her first day on the job, Koehler explained that Srivastava gave her directions to the railroad station where a protest was occurring for International Women’s Day. Hoping to challenge the government to do more to promote womens’ rights, the protesters spoke out against such disabilities as the harassment of female domestic workers. Koehler recalled that, after spending some time chanting, everyone joined hands and stopped traffic as they marched to the Chief Minister’s house.
“Women from all different backgrounds were there – Hindus, Muslims, business women, domestic workers, young and old,” she explained. “Even some men – a male police officer commented on how it made him happy to see youth, my fellow interns, were concerned.”
International Women’s Day occurs each year in India on March 8. The event is meant to recognize the economic, political and social achievements of women. Koehler participated in several more protests while working for the organization, as well as helping at a school for mentally challenged children.
She learned much from her classes and the internship, while growing from the experience of living with an Indian family, spending a lot of time with her host parents, Pankaj and Navita Meherishi and their children Aman and Anusha.
Koehler had the opportunity to celebrate India’s Holi Day, or Festival of Colors, a Hindu holiday which celebrates the year’s harvest. A Holi day tradition, Koehler said, was throwing colored powder or water at one another. The many vibrant colors are used to further recognize the arrival of spring. She explained how she experienced this tradition, among others, firsthand.
“It made me smile that my host parents were rubbing colors on each other for the celebration, who normally didn’t show affection for each other,” she said.
This kind of public affection is not common in Indian society, where the traditional separation of men and women is the norm.
Studying in India overall, Koehler believes, helped her grow as a person and to understand the world in a broader perspective.