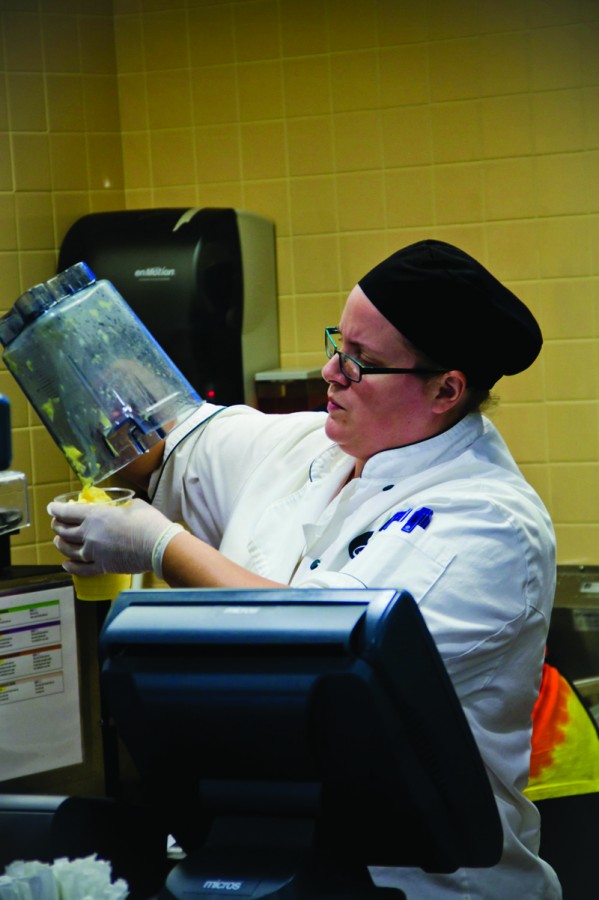 Head Chef Lori Chiodos prepares one of the smoothie blends she created for the new McKinley’s station. CODY MILLER/THE CAMPUS

Students expecting a new Freshens smoothie station may be surprised to see Smoothie Street filling the vacant window that housed the Allegheny Baking Company two years ago.
Originally, national smoothie company Freshens was scheduled to operate where the new station stands. The Allegheny Student Government Senate voted for Freshens over Starbucks almost unanimously in April.
“Everyone was working under the impression Freshens was coming to campus,” said Keiron Stoddart, ’13, President of ASG.
However, when Freshens representatives arrived to survey their new site, problems arose.
The existing deli in McKinley’s limited the space allotted for the proposed Freshens stand. Without undergoing extensive construction, the space could not hold the equipment necessary to run the station properly, said ASG Director of Student Life, Nicole Piccirillo, ’12.
“There really wasn’t a way for anymore space to be made available,” she said in an email.
Negotiations broke down and Parkhurst began to look into other smoothie station options.
“Freshens takes their brand identity very seriously. They would have required substantial bricks and mortar changes for us to have been allowed to have a franchise,” Michael Zanie, general manager of Allegheny College Dining Services said in an email. “We […] were not interested in making changes to the structure itself.”
Instead, Parkhurst worked quickly to develop Smoothie Street’s concept and facilities to make it ready for business in the fall semester.
“We’re trying to make it tie into what’s already in the Campus Center,” said Zanie. The station sports the same bovine logo as McKinley’s itself, a reference to the myth that President William McKinley led a cow up the stairs of Bentley Hall as a prank.
When building the new smoothie station, the college worked closely with local businesses to keep it supplied. The bright Plexiglas signs on the wall outside came from a local vendor, as well as the lighted sign showcasing the day’s menu behind the counter.
Smoothie Street also uses sustainable ingredients and machinery. Like Grounds for Change, it uses only certified Fair Trade coffee.
The streamlined soft serve ice cream machine uses less electricity by adjusting amount of amps that allow it to run at full capacity.
Head chef Lori Chiodo created the recipes for each item available at Smoothie Street (strawberry banana, tropical, blueberry supreme, orange creme, banana berry, seasonal flavor), and uses six different mixes for the smoothies: Trim & Fit, Energy, Protein, Relaxing, Smart and Hangover.
As the seasons change, she said, she will look into adding other mixes, including Immunity and Flu Block.
Expanding student dining option is top priority, according to Zanie and Chiodo.
Although some customers asked for flavored coffee, Chiodo will not serve it.
“We’re not trying to take business away from GFC,” she said.
GFC board member Colin Soleim, ’14, feels no competitive threat from Smoothie Street.
“It balances nicely with GFC,” he said. “It’s good to have a milkshake-smoothie option on the meal plan.”
Smoothie Street complements GFC financially as well, Soleim added.
“I always feel bad for turning people away who only have Munch money,” he said.
Currently, GFC accepts only cash, shop, and “coffee bucks,” while Smoothie Street accepts cash, shop, and Munch money.
Fellow GFC board member Betsy Keene, ’12, also feels optimistic about the new smoothie station. “We thought of serving smoothies in the past but we just don’t have the set up or the space.”
“Smoothies are hard to make, and it would have been hard to train everyone in our large army of volunteers,” she added.