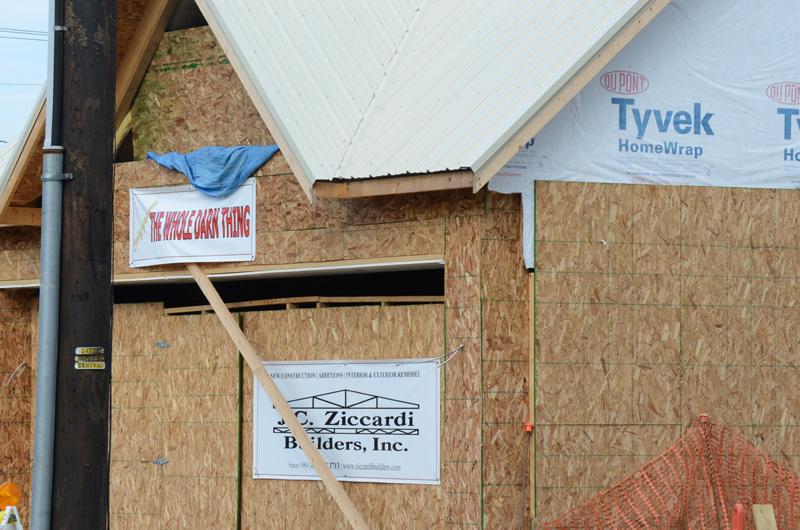 The Whole Darn Thing sub shop is under construction in its former location. Owner Christine Jordan plans to reopen the restaurant in October. CHARLIE MAGOVERN/THE CAMPUS

While the Artist’s Cup Café closed at the beginning of the summer, the Whole Darn Thing Sub Shop began rebuilding and Grace Asian Restaurant arrived on Park Avenue.
The Artist’s Cup, once located on Market Street, officially closed in June, though according to owner Chris Burchard, business had been dwindling since February.  The café was known for its featured local art gallery and coffee bar.
“There was a steady decline in customer base, and with loans and everything we just weren’t generating enough cash,” said Burchard.
Burchard took ownership of the café last November along with Carol Knowblow.  He felt that the declining business had something to do with the loss of their head chef.
“We just couldn’t find anyone to really replace the quality of services and dishes that were made,” he said.
Reed Dunkle, ’12, began working at the Artist’s Cup in August of 2010 under original owner Robin Mitchell.
“The Artist’s Cup was a rare gem to be found in Meadville, I thought,” Dunkle said.
Though Dunkle agreed that the original employees leaving the café played a part in its decline, he thought there was simply too much change in the small café to sustain it.
“Their [Burchard and Knowblow’s] learning was coupled with us learning how to deal with new management, and it left the café without a lot of inner stability,” Dunkle said. “In the end I think all the shifting was enough to topple it over.”
Burchard said he has no plans to reopen, but students looking to enjoy the old Artist’s Cup coffee can now find the same supply just around the corner at Creative Crust.  As for the featured gallery once located inside the café, it also found a new home at the corner of Chestnut and Market Streets.
Not located far from the Artist’s Cup and undergoing its own roller coaster ride of changes, the Whole Darn Thing Sub Shop plans to have its grand reopening by October.
Owner Christine Jordan said that ultimately the financial burden between lost goods, replacement equipment and rebuilding will have cost her about $350,000 of their own savings.
“It’s just been very hectic for us,” said Jordan.  “It’s tough to replace anything because we still haven’t got any money from the insurance company for equipment.”
The shop, located on Market Street, was destroyed in a fire that left one man dead in February.
After Wells Fargo Bank denied her a neighboring location in the American Red Cross building and her search for a location with an existing kitchen yielded no results, Jordan said the business had no choice but to rebuild the original.
“Getting the replacement money for a new building was more beneficial for us than relocating, and we couldn’t lose that location with access to the drive-thru,” she said.
About 25 percent of their total profit comes from drive-thru sales, Jordan added.  She said that maintaining the shop’s convenience and accessibility for the customers also made rebuilding the best option.
Jake Dowling, ’13, used to dine at the sub shop a few times each month.  He enjoyed the food found the service friendly.
“I’m incredibly excited about it reopening,” he said.  “There are so few places to eat in Meadville without The Whole Darn Thing and Gringos.”
However, another new dining option recently replaced Hong Kong Buffet along Park Avenue.  Grace, a restaurant featuring Asian cuisine, opened about a month ago.
Staff member Kevin Susanto said that the menu includes dishes inspired by Vietnamese, Thai, Indonesian and Malaysian cultures. “It’s the best of south Asia,” said Susanto.
Although the restaurant is still new, business seems to be building quickly, he said.
“We didn’t do a promotion,” Susanto said. “We just wanted to be quiet at first as long as we set up portions, food and drink. But then everybody just spread the word so fast.”
Collette Walsh, ’13, visited the new restaurant on opening night and went back three more times that week.
“I have had better Thai food in the past, but of all the Asian food I’ve had in Meadville and the surrounding areas, it’s one of my favorite places,” said Walsh. “Their desire to really please their customers is very apparent.”
Susanto said their goal was to use food to bring life back into Meadville.
“Around the city, it’s so dead and we just only want this town to have life—like New York!”