Bereafest brings it back to the music 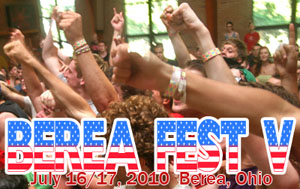 Although the calendar might show that summer isn’t over for another three weeks, classes begin this week, marking the beginning of fall for us college students.
With the demise of summer, we are also confronted with another end: the end of music festival season.
This summer, it seemed that if you wanted to see any decent live music, you had no other choice than to dish out $250, buy a ticket to a festival and bake in the hot sun for hours just to listen to a band worth hearing.
Beyond the price tag and the music, the atmosphere of the average music festival is equally displeasing.
In my experience with music festivals and those who attend them, these events are little more than a corporate-sponsored excuse for people to use drugs and act like they’ve had some sort of musical catharsis, while in reality the music often plays a secondary role to their own intoxication.
In short, if you want to hear about Bonnaroo or Sasquatch, go read Pitchfork or Rolling Stone.
Their writers have the money and the stomach to attend them.
I, on the other hand, am going to write about something that receives absolutely no attention national press and that has managed to fight off corporate sponsorship for six years now.
I’m going to write about Bereafest.
Bereafest is everything that is right with music.
The bands at the event receive no incentives except for gas money, food and whatever they can make selling merch.   Every cent that is made beyond the costs of putting on the two days of music is then donated to a local charity organization.  The price of admission for the 20 hours of music that Bereafest offers: $10.
Much of the music you’ll hear at Bereafest is nothing you have ever heard on the radio, as it features 100 percent independent bands.
Though it started as a celebration of the local punk and ska scene, the festival has since become largely associated with folk rock as well.  There is a lot of variation in many of the acts involved, but each act is still treated with interest and respect.
For folk acts like Paul Baribeau and Eric Ayotte there is attention paid to lyrics and a quiet sing-along, but for more upbeat bands like the Sidekicks and Lemuria,  dancing and screaming at the top of ones lungs is still customary. Bereafest’s punk roots are still apparent.
When you walk through the doors of St. Paul’s Lutheran Church in the small college town of Berea, Ohio and into the thick, musky air that surround Bereafest, you feel a change.
You feel an overwhelming sense of community with the bands and fans alike; you feel a connection to the others in the room who came only to listen to music and feel something genuine.
Before you go and blow all of your money on Coachella next year, I recommend giving Bereafest a try.