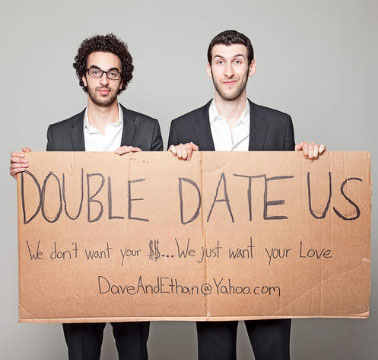 Ahdoot and Fixell tour college campuses across the country providing comedic advice to students on dating. They became a YouTube sensation and recently performed at the People’s Improv Theatre in New York. ERIC MICHAEL PEARSON/DAVEANDETHAN.COM

Dave Ahdoot and Ethan Fixell have become YouTube sensations after what began as a ploy to find a double date has become a series of goofy advice and dating shenanigans.
This Saturday, Sept. 3, Allegheny will welcome “College Dating Coaches” Ahdoot and Fixell at 9:30 p.m. in the Campus Center lobby.
GAP official Katherine Bowser, ’12, and a few other members discovered the pair at a convention last spring.
“I think what appeals so much is that they’re comedy with a twist,” said Bowser. “They aren’t your typical stand-up comedians. They’re more interactive and their humor is directly targeted at college students, so it’s something everyone can relate to.”
Bowser expects a big crowd for the show, in which Ahdoot and Fixell will provide comedic advice on kissing, dancing and other various aspects of dating for college students.
“We thought they would be a great way to start off the year,”  said Kelsey Gooding, ’12, a member of GAP.
Rachel Wilcox, ’14, has tuned in to the videos and says it is the goofy nature of the comedians is what makes the act so entertaining.
“I watched a couple of their videos and these guys are tools,” said Wilcox. “But that is what makes it so funny.”
Bowser, along with other members of GAP, is hoping the show will score as big with students as it did with those who attended the conference last spring.
“I definitely have a favorite part, but I’m not going to spoil it.” Bowser said. “You’ll just have to come see for yourself.”
Gooding feels that the act will be a popular event for the first weekend of campus.
“Comedians usually go over really well here at Allegheny,” said Gooding.  “Their act is really great and very comical.”
Wilcox cited one specific piece of advice as the main reason she will be attending.
“Their secrets to a successful relationship are fantastic,” Wilcox said. “Don’t be crazy and don’t have herpes. I was pretty much hooked after that.”
In addition to performing on college campuses, Ahdoot and Fixell have performed in New York comedy clubs, sharing the stage with famous comedians such as Jim Gaffigan. Ahdoot and Fixell have also been featured on TV shows such as The Colbert Report and Millionaire Matchmaker.
Dave and Ethan’s YouTube channel is called  “DaveAndEthan” and features popular videos such as “Double Date Us”, “Using Accents to Pick Up Girls” and “Picking Up Girls on the Subway.” These videos, among others, have already recieved thousands of views. The comedians and their relationship advice can also be found at daveandethan.com, as well as their accounts on Twitter and  Facebook.