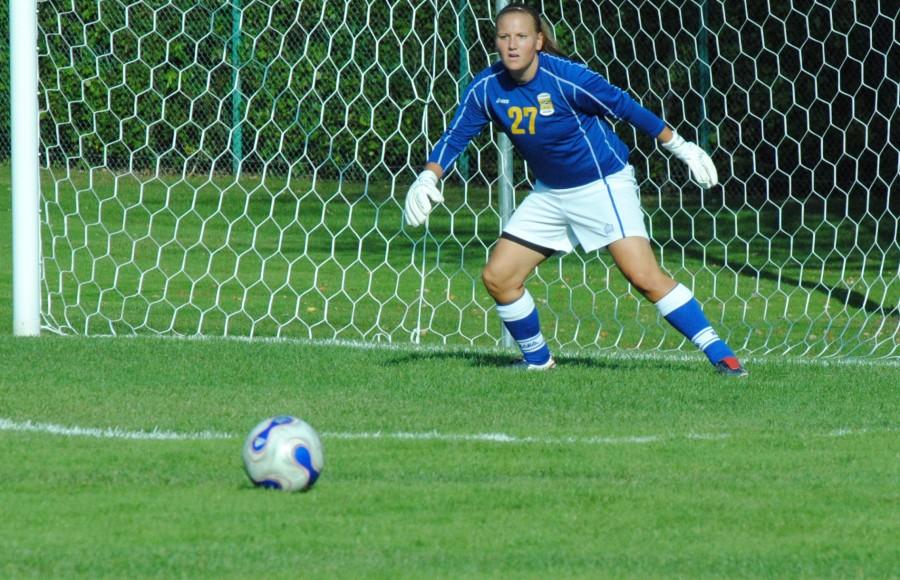 The Allegheny women’s soccer team wasn’t picked to win the NCAC this year, but that is not stopping them from shooting for a conference title.

After posting one of the best seasons in Allegheny history, the women’s soccer team has been picked to finish second behind last year’s champion Denison, who also reached the NCAA quarterfinals.

The Gators return eight starters and hope to reproduce last year’s 12-0-3 start, which was the best in the program’s history.

With the return of several key players from last year, in addition to some new faces, the players believe a conference title is a real possibility.

“The incoming class has some phenomenal prospects and the upperclassmen are definitely stepping up their game, making us a very deep team,” said Alex Gordon, ’12. “That will definitely play to our favor when conference play rolls around.”

The Gators are making the extra effort to play and practice as a single unit as they work towards their long term goals.

“Staying together when we get down or when we are having trouble offensively is going to be important,” said goalkeeper Emily Karr, ’12. “I think we all have the same goal in mind and we’ve been working towards that together. Our attitude on and off the field has become more focused and we know what we need to do.”

Last season Karr was a strong performer for the Gators, finishing the season with 10 shutouts. She also held the opposition scoreless for the seventh longest amount of time (1,092 minutes) in NCAA history. Her performance, along with that of All-Region sophomore Alison Buzzard, highlighted a season that they hope to build upon.

“I think one of our ultimate goals as a team is to advance past the first round of the NCAA tournament,” Gordon said. “We lost in the first round last year and you always want to build off your past successes.”

Players recognize that reaching their goals this season will require more than just pure talent and dedication. They will also need to maintain the team chemistry that fueled last year’s memorable run.

“Our team is pretty tight off the field, which contributes to on-the-field dynamics,” Gordon said. “Coach Webber and [assistant coach Linda Schirmeister] always reinforce how important it is that we support each other as teammates and it’s definitely something we’ve taken to heart as a group.”

While unity within the team is important, players feel that it is equally important that they remain grounded and focused on this season rather than resting on last year’s accomplishments.

“Our biggest challenge this year will probably be being able to put last year in the past and concentrate on this year as a whole new year,” said Kira Kliment, ’12. “We want to set our goals high this season just as in previous seasons and make it to the conference final and NCAA tournament again.”

Karr also stressed the importance of taking a fresh approach to the season.

“Each year is different and I think we’ll take a different path than last year,” Karr said. “We have a lot to figure out.”

The Gators open their season with the Dickinson Invitational Friday Sept. 2 at 6 p.m. against Lycoming.

They will play five games before their home opener Sept. 14 against Grove City.