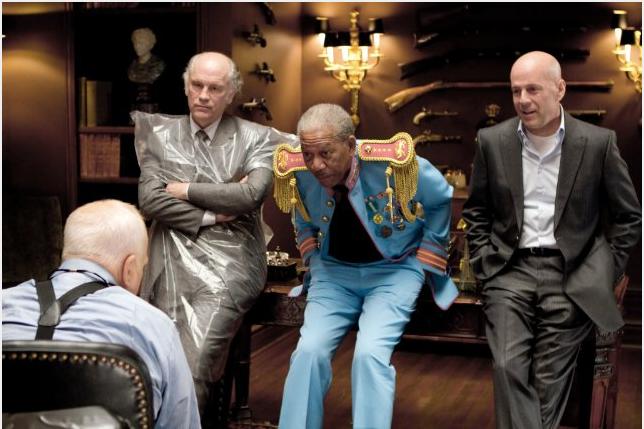 Once upon a time (in the 1980s), all you really needed to make an awesome action movie was a hero with ‘roid rage, prop assault rifles and a top–tier demolition guy.
Today most action movies are moving towards parody at a breakneck pace, a la “Snakes on a Plane,” while a handful are dealing with mature issues, like last year’s “District 9.”
After twenty years of cheese, you’ve either got to lay it on thicker than ever or show some growth.
Unfortunately “RED” completely fails in both these regards.
This is a movie trapped in a profound identity crisis, never committing to either absurdity or emotional realism.
Because of this tonal inconsistency, “RED” is neither funny nor compelling — it is merely an anachronistic regurgitation of the same shootouts we’ve seen for decades.
Using tired images, “RED” tells the tale of retired special operatives. Bruce Willis plays Frank Moses, a CIA legend who’s now slated for assassination. When his house is literally cut down by bullets, Frank travels to save his love interest Sarah (Marie Louise–Parker), collect his old crew and figure out who’s trying to kill him.
If you think you’ve heard this story before, it’s because you have.
Fortunately the crew brings plenty of star power. Morgan Freeman plays the mentor, John Malkovich plays the crazy colleague, and Helen Mirren plays the girl (grandma?) with guns.
This is cookie cutter stuff, but Malkovich and Mirren are simply too talented to be hemmed–in. Despite a terrible script, Malkovich routinely draws laughs and Mirren nails all her scenes.
Out of the supporting cast, Morgan Freeman is the odd man out. Freeman is never believable as either a cold–hearted killer or a man old enough to belong in a retirement home. Once you’ve gone Nelson Mandela, you can never go back to black–ops assassin.
The superstar cast is shuffled between cities and life–threatening scenarios like a high speed chase, pausing only for moments of comedic relief.
There is very little character development and even less plot development. The two villains are more MacGuffins than people, as they probably appear on screen for less than five minutes combined.
Of course, in classic action films, it doesn’t take revolutionary storytelling or dynamic characters to produce entertainment — it just takes some ass-kicking. “RED” fails most completely in this regard, though.
The action sequences lack punch because the team is sometimes superhero–like and other times uncharacteristically frail. While Bruce Willis can step out of a power–sliding car more comfortably than an ordinary person gets out of a parked car, all it takes is a little snow for Marie Louis–Parker to slide down a cliff right into the bad guys’ hands.
If the hero, the guns and the explosions were still a surefire formula for success, “RED” wouldn’t be terrible. But we’re not trapped in the ’80s any longer.
Yesterday’s cult classics are today’s categorical failures, which seems oddly pessimistic for a film about old age and retirement.
Delete Image
Align Left
Align Center
Align Right
Align Left
Align Center
Delete Heading