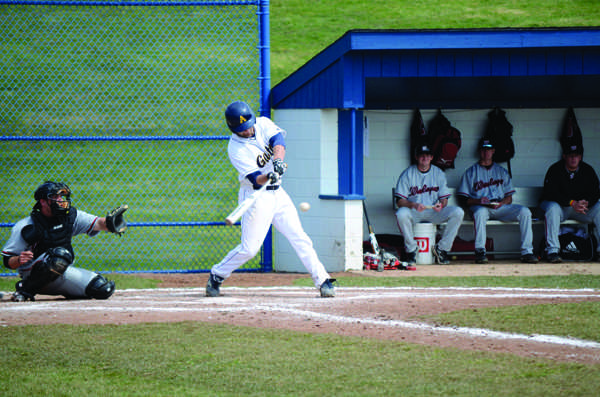 Aaron Lynch, '11, is third in the NCAC in batting average (.448) this season. Photo by Charlie Magovern/The Campus 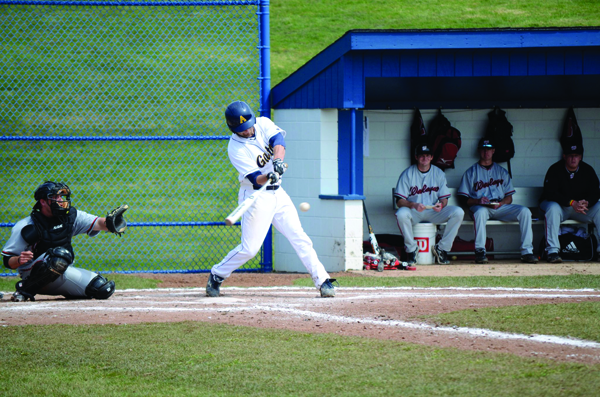 Springfest wasn’t the only thing affected by rain this April. Just ask the Allegheny baseball team. Thanks to three consecutive gloomy weekends, the Gators have just five days to play out their final eight NCAC games- weather permitting, of course.

Allegheny has played only once this past week, and with their last conference game coming on April 10, the players are getting antsy to play in a game with high stakes.

“It’s kind of like when you have one of those really long innings where your pitcher is walking a lot of people,” said senior outfielder Zach Nichols. “We’re ready to play and our guys are itching to get out on the field.”

Allegheny has until Tuesday to get in as many games as possible, and must play at least four to be eligible for the playoffs. But since the Gators are currently in seventh place out of nine with a 3-5 conference record, it’s likely going to take more than four wins to make it to the postseason.

The flurry of games will to put a major strain on the Gator pitching staff, which has struggled with depth this season. Though their top two starters, senior Mike Pereslucha and freshman Kyle Davis are in the top 10 in ERA in the NCAC, the Gators’ team ERA is seventh at 6.35.

“We’re really going to need to have some guys bounce back earlier than they normally would and have guys contribute that haven’t contributed as much,” said head coach Kelly Swiney.

The plan is to start Davis and Pereslucha today at Oberlin, then senior David Stawser and sophomore Frank Brank tomorrow at home against Kenyon. From there, Swiney will have to be creative.

“We hope that maybe Davis can bounce back on Sunday against Wooster, and then we kind of don’t know from there. We’ll see where we’re at,” Swiney said.

Gators are hoping that their offense, No. 7 in the country, can drive them into the playoffs. Seniors Matt Stahl and Aaron Lynch, along with junior Ben Lowmaster, are the NCAC’s top three hitters, with three others in the top 20.

Outhitting the opposition is a real possibility, mostly because Oberlin and Kenyon’s starting pitching lacks depth.

“Kenyon and Oberlin have one ‘shut-down’ guy,” Nichols said. “Beating them would give us the confidence we need in the second games.”

Even if Allegheny doesn’t get the wins they need to move on this weekend, Swiney and the rest of the Gators don’t want Mother Nature to be the one responsible for them missing the postseason.

“Win or lose, we just want to get the opportunity to play our way into the playoffs,” Swiney said. “I don’t want to be sitting here on Tuesday saying, ‘Well, we didn’t get to play this team or that team, and if we did we might have made the playoffs.’”

The cards have been stacked against the Gators, but they believe they can make a strong showing at the NCAC tournament if they are able to pull off a playoff berth.

“It’s just about making the tournament,” Swiney said. “We feel if we make the tournament we have as good a chance if not better than anybody to win it.”