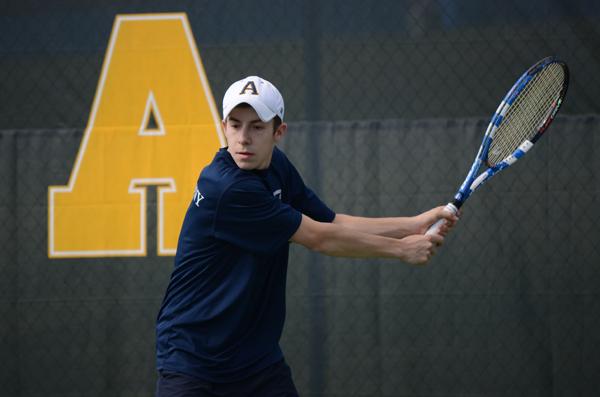 Three weeks into the spring season, the Allegheny men’s tennis team’s biggest challenge isn’t on the opposing baseline. Due to inclement weather, the Gators have only played three matches in the past two weeks, and are working to adjust accordingly.

Case Western defeated the Gators 7-1, but the one bright spot from the match was freshman Patrick Cole, who continued his winning ways that started in Florida. Cole defeated the No. 17 regionally ranked Sean Carr. His record for the season is now 14-4 as the No. 1 singles player for the Gators. Cole’s success comes from his ability to stay within himself and not worry about outside factors.

“I just focus on my game, the pressure is usually on the other team,” said Cole. “I’m never really expected to win, so I just go out and play my game.”

Cole also gave credit to his coaches, teammates, and the women’s team for the support they showed him during the match to give him the motivation needed to get the win.

Mike Provenzano also had a strong performance against Case Western for the Gators as their No. 2 singles player. Despite him losing, head coach Jared Luteran said that he was happy with Provenzano’s tenacity against a quality opponent and how he displayed a solid ground game from the baseline.

Provenzano thinks that just a little bit more fine-tuning will have the team playing to their full potential soon.

“As a team and individually we just need to focus on little things, we’re right there,” said Provenzano.

The Gators bounced back from the losses last Wednesday in their final home match of the year. Allegheny defeated Thiel 9-0 and played almost their entire lineup, giving younger players valuable experience. With the win, the Gators moved closer to their season goals of finishing second in the conference and being regionally ranked.

It has been a week since the Thiel victory, and the Gators are not scheduled to play another game until next weekend due to the weather. Four games have been cancelled this spring, most recently Wednesday’s match against Robert Morris.

To keep his players fresh, Luteran has changed the practice schedule by using more inter-squad scrimmages than usual to keep the competitive spirit up.

Scrimmages can only do so much, though.

“The surface on the gym and outside are very different, so we have to get out and hit outside as much as possible and take advantage of warm weather when we have it,” Cole said.

When the Gators finally do take the court again next weekend, they will be on the road at Wooster and Oberlin.