Underneath the Plush: Chompers’ Identity Revealed 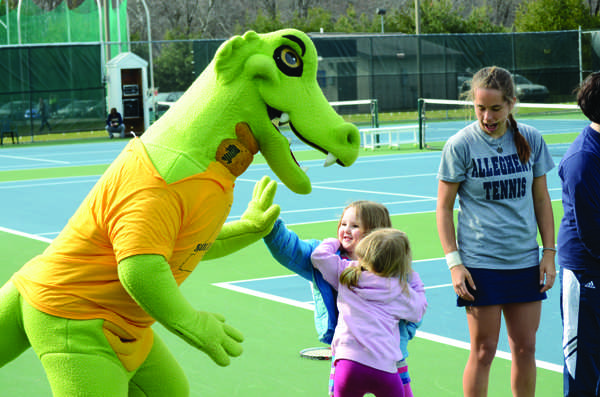 We've all wondered who brings Chompers to life. Photo by Charlie Magovern/The Campus

Students have seen him gracing the sidelines with his high fives or his hip dance moves, or maybe you’ve posed for a picture or two with him around campus. He’s big. He’s green. He’s Chompers.

Tim Riskie isn’t big, green or scaly, but he is dedicated and enthusiastic about his role as the school mascot. The assistant tennis coach decided to take on the duties of being Chompers after he realized that nobody on campus was making use of the suit on a regular basis. He felt like he had the talent, and became a regular act at sporting events following his first appearance.

“I’m a fantastic dancer,” said Riskie. “That always helps. When my schedule permits, I’m happy to do it. It’s a lot of fun.”

Not everyone is impressed with Riskie’s dancing abilities, but some don’t necessarily think that’s a bad thing.

“Coach Riskie makes a great Chompers because he has some of the worst dance moves you have ever seen,” Luteran said. “This is what you would expect from a giant alligator, so he helps to bring a very realistic perspective to the mascot.”

Tennis player Carolyn Shetter, ’14, is proud of her coach’s abilities as a mascot.

Being the school mascot isn’t always glamorous. It gets hot in there, and Riskie quickly learned that certain precautions like a headband are a necessity to being Allegheny’s favorite gator.

“After my first game, I took the suit off and I was drenched,” he said. “Everything down to my ankles was just a big sweat stain. I was exhausted. That was my workout for the day.”

Riskie insists that the job is well worth the suffering. He enjoys his interactions with the fans, even the rowdy ones.

“If I see a group of rowdy fans I try to go right up in there and start dealing out high fives everywhere because I’m there to try to involve the crowd, not to shy away from them,” he said. “They usually love it, they’re in there saying, ‘yeah Chompers!’ and yelling only good things at me.”

“I’ve had a couple people pull my tail, especially little kids,” he said. “They try to be sneaky and I usually just turn around and chase them or something.”

Some of Riskie’s biggest fans are his players, but they weren’t always aware of their assistant coach’s alternate identity. He took advantage of the anonymity.

“At first the team didn’t know and I saw a couple players in the crowd and they didn’t know it was me, so I went and sat right on their lap and made it really awkward,” he said. “I just did stupid stuff and picked on them a little more than everybody else because I know them.”

Riskie plans to continue his act as mascot for the remainder of his time here, but he does have some words of advice for those who hope to one day assume his role as Chompers.

“You have to be involved with the crowd; you can’t just be in the background waving at people,” he said. But the No. 1 rule?