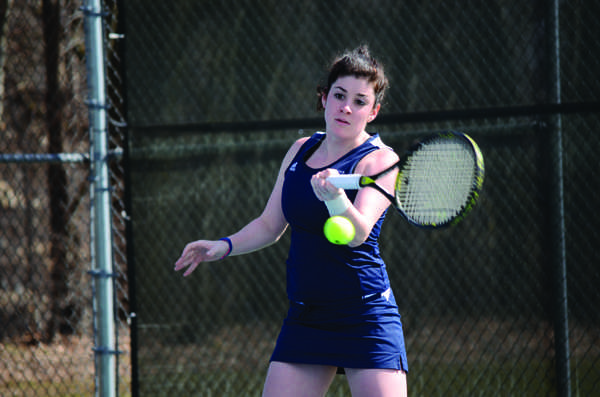 Deb Landau, ’12, is 4-1 in singles since her return from a wrist injury suffered a week before the spring season began. Photo by Charlie Magovern/The Campus

A week before the spring season started in February, women’s tennis player Deborah Landau, ’12, was headed to the doctor instead of the courts.

The junior was diagnosed with triangular fibrocartilage complex in her left wrist, her dominant hand. Landau was sidelined for five weeks in the beginning of a season, a tough time for any player to be out of the sport they love.

“It was very difficult to do everyday things,” said Landau. “I missed practicing with my team the most, but they were really supportive throughout the five weeks.”

While Landau was unable to participate in their first spring match against Penn State Behrend, freshman Laura Steele stepped in with wins in both singles and doubles.

“The upperclassmen and myself have done a very good job adjusting the freshman to the style of collegiate tennis we play at Allegheny,” Landau said. “The team helped me in the same ways as I recovered from my injury at the beginning of the season.”

After five weeks stuck in a splint, Landau worked with assistant coach Tim Riskie on getting comfortable on the court once again. With pivotal matches during the team’s spring break trip only two weeks away, Landau had no time to waste. Landau worked extremely hard trying to get match-ready, and within a week or so she felt she was ready to come back.

“I felt pretty good about returning,” Landau said, “Hitting with coach Riskie helped me gain my confidence back on the court.”

Prior to this year, confidence wasn’t always Landau’s strongest trait. Her mental toughness is something she’s focused on developing coming into her third season as a Gator, and the improvement couldn’t have been more helpful.

“I feel like that is one of the main reasons I was able to make a speedy recovery,” Landau said.

Her increased confidence has shown in her results thus far on the court. Since coming back from injury, Landau boasts a 4-0 record in doubles and a 4-1 singles record. Most recently, she collected her 30th win as a singles player to go along with an already impressive career doubles record. Landau also hasn’t had a loss in doubles since September.

“Landau injured her wrist and jumped in right before break and did a wonderful job with a 3-1 singles record,” head coach Jared Luteran said, “We have a good core group that includes Landau. They are confident, experienced and mentally tough.” Tennis takes an entire organization’s effort in order for all players to be successful, and Landau is a perfect example of that.

“We are a very close team,” Landau said, “We have improved on supporting each other and helping each other with flaws in our game.”