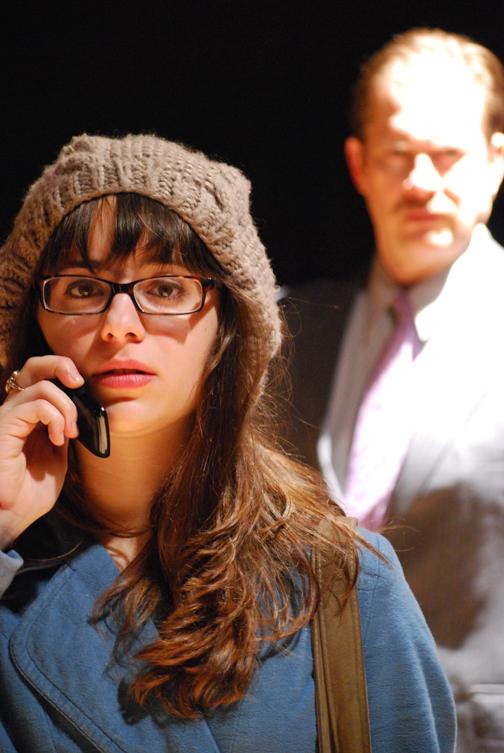 “Dead Man’s Cell Phone” begins with mousy little Jean, played by Allegheny student Lauren Farruggia, passing time in a café. A table away, a man (Mitch Micosky) is slumped back in his chair.

There’s nearly nothing on the stage: two tables, two chairs, two bowls and two bodies. With only about five feet between them, Jean and the man seem so far away.

She finds that she loves Gordon in some vague way. She needs some closure herself.

The play has a surreal flavor to it. The set pieces move by themselves on tracks, in a way that is partly spectacle without ever being distracting. The set design is sparse, as is the lighting, so much is left to the imagination.

For the most part, the performances are excellent. As Jean, Farruggia manages to play it meek and timid while still commanding our attention. As Gordon (spoiler alert: Gordon has a monologue, possibly the high point of the play), Micosky is the brash, abrasive businessman who we can’t help but be drawn to.

A competent performance by Deb Ormston, Gordon’s “rich bitch” mother, is brought down when she can’t trade in being ornery for legitimate anger. And as Gordon’s mistress, Sonia Firster can’t completely sell it as sexy and exotic and instead ends up sounding a bit like Dracula.

But slight missteps in performance bring us out of the play only briefly.

As “Dead Man’s Cell Phone” clips along towards its surreal yet emotionally satisfying conclusion, we never get lost, even when we aren’t quite sure where we are.

“Dead Man’s Cell Phone” is playing Friday and Saturday at the Meadville Community Theater (located in Oddfellows) at 8:15 p.m. Tickets are $10 for adults and $7.50 for students.