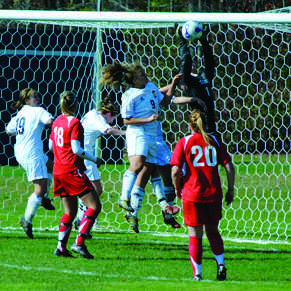 Despite the best season start in team history, women’s soccer’s winless week at home still has them fighting for a playoff spot.

With the NCAC playoff picture still unclear, the women’s soccer team looked to keep their undefeated season alive against fellow unbeaten NCAC teams Wooster and Wittenberg.  The week did not go as the Gators had hoped as they finished with a tie and their first loss of the season.

For the first minutes on Oct. 19, it seemed like they were on their way to their fourth NCAC victory. But the Wooster Fighting Scots (12–3–2, 4–1–1) were resilient and tied the Gators 1-1 in the matchup of the top two teams in the conference.

The first half was dominated by defense, with the Gators only getting three shots on the Wooster goal. Allegheny’s defense was equally as strong, however, only allowing the Scots two shots on goalkeeper Emily Karr, ’12, who only needed to make one save in the half.

The Gators maintained pressure on the Wooster defense including a hard shot by Abby Silvester, ’11, late in the first half, but after the goalie’s diving save, the Gators were unable to generate much more offensively for the duration of the half.

The second half started off with a bang after head coach Michael Webber’s comment to the referee earned him a yellow card.

“It was not appropriate, but I was surprised to get the card,” said Webber.

The Gators were able to keep some pressure on the Wooster defense throughout the second half as they got eight shots off during the period. The breakthrough came for the Gators in the 79th minute after a handball on Wooster. When the ball was kicked, four Gators players rushed at the Scots’ wall, and Silvester cracked a shot into the upper portion of the goal.

Webber shared the strategy behind the play, which he picked up from a professional team.

“It is designed to break apart the wall, but mostly it is to cause a distraction for the other team’s goalkeeper,” Webber said. “It also gives us options with two people running to the outside to maybe get a pass.”

The Scots scored in the 83rd minute when the Gators were unable to clear the ball out of their box. Wooster’s Erica Kay shot the ball past Karr, who conceded her first goal on the season. Karr had previously played 1091 minutes without letting in a goal.

During the overtime periods, Allegheny was able to produce five shots to Wooster’s two. A free kick, which proved to be the Gators’ best opportunity for overtime, went just wide with five minutes remaining.

Webber was not happy with the way the team executed their strategy during the match.

“Our game plan is to possess the ball, string a lot of passes together and get the other team tired,” Webber said. “Today we didn’t do that. We were too direct.”

The Gators honored their eight seniors before falling to the Wittenberg Tigers (12–3–1, 4–1–0) and losing their first game of the season 2–1 Saturday.

“For the first 20 minutes, we played the way we were supposed to play,” said Coach Webber.

The Gators had several chances in the first part of the game off of shots by Silvester, Nicole Mascia, ’11, and Georgia Frost, ’12. Mascia got the team off to an early lead when she tapped the ball around the Wittenberg goalkeeper Melissa Gartner and put it into the open net during the 18th minute.

They stayed ahead until the 33rd minute when Wittenberg’s Kailey Striebel struck the ball from 25 yards out, which passed the outstretched arms of a diving Karr. The goal was the second Karr had allowed this season.

The Gators almost struck back, but Wittenberg’s Gartner made a save on a breakaway. Gartner, who made five saves on the day, often stymied the Gator attack. Georgia Frost almost struck midway through the second, but Gartner was there to make the save once again.

Allegheny’s Karr played stellar as well, making game-saving stops in the 73rd and 75th minutes. In that span, the Tigers also hit two crossbars but failed to score.

Neverthelesss, in the 82nd minute, the Tigers poked the ball over Karr’s head and into the net. The Gators failed to generate many chances after that moment, and slipped to the ranks of the beaten.

“We had plenty of opportunities,” Webber said, “but with a direct team, you can’t let them hang around.”

“We are taking the week one day at a time and using our game against Daemen to get ready for Saturday,” said midfielder Becca Crissman, ’12.

The team will be in search of the NCAC playoffs this week as they face a must-win game at Ohio Wesleyan Saturday at 5 p.m. The Gators are currently fourth in the NCAC standings, and need the win to clinch a playoff spot.