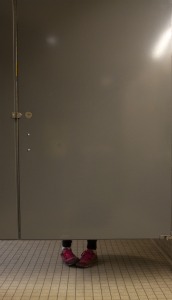 Selene Baker still in the stall.

This article was produced for The Compost, our April Fool’s issue. The contents are entirely fabricated. Any resemblance to real people or events is entirely coincidental.

The bathroom toilets have flushed over 400 times during the stakeout Selene Baker ’11, has kept in the third bathroom stall of the campus center second floor. But Baker certainly hasn’t been counting noises from a stall for her health.

Baker is a self-admitted poop shy—a member of society who has a phobia of relieving themselves in public.

“It’s just a shitty situation for everybody,” Baker said during an impatient interview held next to her stall. “They know I’m not going to make bathroom noises while they’re in there, and they know I’m in there but don’t want to bring attention to the fact that my pants are around my ankles. What if a noise eeks out?”

Baker admits that she is most afraid of the noises that people might hear, but that fart smells are a close number two.

“I think everyone is a little poop shy at heart,” said Tabby McGill, ‘14. “The worst is seeing the person after you heard the plop. The plop. Even the word is terrifying to those who care about their social standing.”

The bathroom stall can be a place of anxiety for people used to the privacy of their single-toilet bathroom, so much so that even the larger handicapped stall at the far end isn’t enough space to make the bowel movement seem like home.

But some advocates don’t think poop should be something to shy away from, even in public.

“Dude, shit happens,” said Dan Bauer, ’13, who is running a campaign against students targeting on-campus deuce-droppers in the form of disparaging looks—usually given through mirror reflections.

Baker’s stall stalling may make her more prone to disorders like irritable bowel or distended intestines.

“Sometimes the toilet will flush while I’m still on it,” Baker said. “People turn the lights off on me constantly. But before I even start—sure enough—someone else will come in.”

When asked if she was viral on campus, Baker responded that she was positive it wasn’t food poisoning and that “if people left me alone, I could be done. I just want to wash my hands of this whole experience.”

Follow Selene Baker on Twitter at ShakeNBakeGDANDHI, or catch her during her stall standoff on the second floor lobby of the campus center.

Poop shyness is a serious epidemic that affects over five million Americans daily.

Though this is an isolating illness, hotlines are open 24-hours per day at 1-800-POUP to help those struggling through this painful disorder. Digital assistance is available. You do not have to suffer silently.