Ghosts of Allegheny’s past sound off 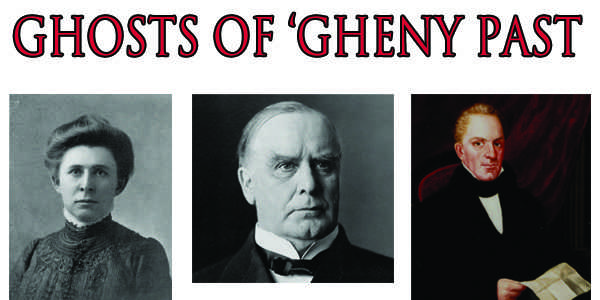 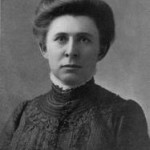 You shame my very existence.

I, personally, can’t believe you’re even reading this despicable rag they call a newspaper.

Put it down and go consume something that will enrich your mind or expand your worldview.

You are most certainly wasting your time here; stop staining your fingers on dirt and grime aiming to pass for reputable journalism and go read my biography.

Then again, you can’t really blame these poor intellectually impoverished journalism students—the once world-class Allegheny education offers them no semblance of training in the Highest Craft.

The mistake-riddled, bias-laden drivel they produce each week is really more of a reflection on the failure of this formerly prestigious institution.

Did I do all that goddamn muckraking for nothing?!

Is my name worth absolutely nothing on this campus?

They’ve dedicated an auditorium to a glorified Eagle Scout and named a cafeteria after a pudgy monopolizing president.

Yet you’ve been discussing the parameters of a journalism program in a committee for months with little substantial to show?

And you’re not even planning to name it after me?

And I curse your little journalistic experiment, “in the public interest.”

Ha! You can’t even agree on what that means!

Truly, this school and this newspaper have disappointed me to the core of my being.

I’m done with this place, and I certainly won’t return until this publication has the prestige and this school has the journalism program worthy of my legacy.

Ida Tarbell was a member of the class of 1880. She is famous for her investigation of the Standard Oil Company in the early 1900s. She is dead. 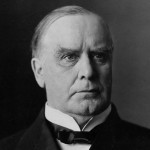 I annexed Hawaii. I picked a jolly good fight with Spain. I snagged the Phillipines. Cool, right? Maybe you remember me as the 25th President of the United States? Right in there, between Grover Cleveland and Teddy Roosevelt.

What you shouldn’t bother remembering as is “William McKinley, Allegheny alumnus.” Although I have certainly left a legacy behind me, I cannot honestly say that Allegheny College had much to do with it.  It was a delightful place, really.  But come now, I was there for a year, I left without a degree and I moved on with my life.

It was a fling, or perhaps a quaint little one-year getaway to the wooded hills of Pennsylvania.

And what do I see at Allegheny now?  My name is plastered everywhere. It’s ridiculous!  They throw around my credentials as if I graced their campus with my scholarly genius and political stature for four years. Ha!

Listen, I wasn’t poring over books or contributing to some academic tradition at Allegheny.  I was letting loose, drinking moonshine and meeting women.  I barely remember what I did there, to be honest.  I used Allegheny as a place to unwind for a year.  Don’t get me wrong! Those were some good times.  But my name has become another petty admissions selling point.

Seriously, if they name one more thing after me or make up one more story about what I did while I was there to tell on campus tours, I’ll go nuts.  I wasn’t pushing a cow up in the Bentley bell tower that night; I was working my magic on three lovely ladies over some drinks.

What a stupid, contrived story.  Even worse, they named a mediocre dining hall after me!  I’m embarrassed.  Every day, students ignorantly taking my name in vain to refer to eating at “McKins.”  I want to vomit.

Only God knows how much money they’ve made off of my name, possibly millions.  If I were alive, you have no idea how much I would demand in royalties.

President William McKinley attended Allegheny College for one term in 1860. He was president from 1897 to 1901. He, too, is dead. 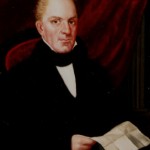 If not for the grace of God, I should have long ago bored a tunnel to Hell with the incessant rolling that has occupied me in my once-peaceful grave.

I should have guessed that moral corruption would have beset my formerly virtuous creation when the College began to admit the weaker sex into its hallowed halls.

It should have been painfully clear when the College terminated its practice of levying a Fee on those same timid beauties for the upkeep of their complex nervous systems.

This Institution once boasted the admiration of President Thomas Jefferson and could lay some claim to the respect of the God-fearing populace of these United States.

Now, its only purpose is to attempt to restrain the wild Passions of a student body almost entirely made up of willing Antichrists and positive Heathens.

Shut thy mouth and stop thy mind!

I know well thou art formulating asinine defenses against my just and holy Accusations.

The three hours thou spent volunteering at the soup kitchen are no defense against the wrath of our Lord.

And thou must think me a fool if thou expecteth me to swallow thy charity “dance party” as anything more than a transparent excuse for unholy crimes of Lust and Intemperance.

Thou shunneth thy honest studies in favor of such reprobate affairs as thy Spring Festival, nothing but a weekend of anonymous Sluttery, Bitchery and the vacuous “music” of Third Eye Blind.

Thou publicly disgrace thyselves and the institution thou claimeth to represent by marching in support of the rights of Homosexuals and other base sinners to live comfortably and openly engage in moral corruption.

The only time thou ventureth down the hill from thy den of iniquity is to purchase alcoholic Drink, Contraceptives or to engage the Devil’s doctors for an abortion.

The Lord instructs us not to hold hate in our hearts for our neighbors.

But I would be practicing deceit if I did not admit that I relish the day when thou and thy fellow students descend to boil in the eternal Fires of Hell.

I shall look on thy just agony with no small pleasure as I reflect on the values my institution once upheld.

And from the glorious gates of His own home, I shall allow myself a small smile.

And with the demon of intemperance possessing thy souls more violently than ever, it surely won’t be long until thou all suffocateth on thy own sick and pass from thy ruined mortal Coils.

Reverend Timothy Alden is a graduate of the Harvard School of Divinity. He founded Allegheny College in 1815. He served as Allegheny’s first president until 1831. Don’t worry, he is dead too.