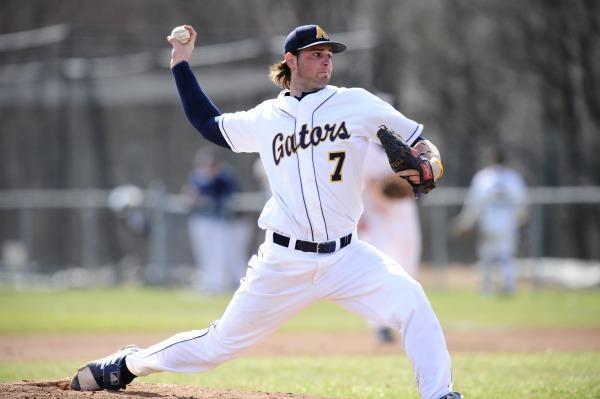 The Allegheny baseball team is off to a fast start this year, sitting at 3-1 after their first tournament, the Ripken Experience, in Myrtle Beach, SC. Their only loss was a 4-1 loss to Catholic following wins over Penn State-Abington, Wilkes and Penn State-Berks. Head coach Kelly Swiney is excited about the fast start and the strength of his pitching rotation following the road trip.

“The big key last weekend was that our top three starters all had good weekends,” he said.
Those three starting pitchers, senior Mike Pereslucha, senior David Strawser and freshman Kyle Davis, are likely essential to continued success for the Gators. Since their game against Washington and Jefferson was postponed, the team has not had a game since March 6 and will have a two-week layoff until their next game at the RussMatt Inviational in Winter Haven, Fl.

According to Swiney, the team will be tested, as all the teams they play (Salem State, Bowdoin, Wisconsin-Stevens Point, St. Olaf and Union) are quality opponents. Wisconsin-Stevens Point has yet to play a game, but is currently ranked No. 2 nationally. The other teams the Gators will face in this tournament always can be seen around the top of the standing in their conferences.

“It will be a good challenge for us to see exactly where we stand,” Swiney said.

Last year Allegheny fared well, going 5-2 in this same tournament against same teams except for St. Olaf. They will look to duplicate that success this year.
One early season concern to Swiney, though, was the lack of consistent hitting. Pereslucha also echoed this concern.
“We were able to get timely and clutch hitting, but the ball was not flying off the bat,” he said.

Sophomore Phil Morrisette, who hit a two-RBI double against Penn State-Berks, agreed that their performance at the plate is the missing piece.

“Once our hitting gets on track, we will be a tough team to beat,” he said.

The team is confident that the offense will eventually become a strength for the team. This will happen, according to Swiney, as leadoff hitter, sophomore Eric Hansen, 3 and 4 hitters Ben Lowmaster, ’12 and Matt Stahl, ’11, improve following the opening weekend in which they all hit under .300. While they had a slow start to the year offensively, Swiney is sure this will not remain the case. The 7-8-9 hitters were a pleasant surprise during the tournament, and needs to continue for their Gators to achieve their goals for the season.

These goals include winning both the NCAC regular season and tournament championship despite being voted to finish third in the preseason poll. A conference win would give the Gators an NCAA tournament bid, another one of the team’s goals. The alternative to making the national tournament without an NCAC crown is a 30-win season.